I Will Not Apologize Lyrics

I Will Not Apologize Lyrics

[P.O.R.N.]
I'm so sick cause I'm infected but but I don't need a medic
Need a liquid anesthetic, let me show you how I get it
I don't got it but I bet it, I don't worry, I don't sweat it
You can bitch, you can dead it, you can take it there like FedEx
Nothing sweet diabetic, big dog can't pet it
Pack an L then I wet it then I fill it till it's pregnant
(Take the high back) face it everybody got a favorite
I embrace it like I date it but my grandma think I chase it
(Like oh yeah) I told her that her baby moving slower
Cuz the world is on his shoulders then I woke up out that coma
(And got right back) at it with a little black 'matic
Lay you down craft-matic, then I'm gone, black magic
(To the hideout) you don't want to gamble with the devil
Especially when them chewy blueys got me on another level
Cuz my teacher think I'm slow but my momma think I'm special
But even she know I'm coming back like an echo.

[Dice Raw]
For the statements I'm about to make I will not apologize
Niggas talk a lot of shit, really need to stop the lies
Jewels rented, cars rented, homie that ain't authentic
Acting tough on TV but to me you seem a little timid Don't blame the nigga, blame America, it's all business
Acting like a monkey is the only way to sell tickets
Shit I can dig it, niggas gossip silly digits
White kids buy it, it's a riot when we talking about pimping
Or sipping on old English brew or whatever they think we do
Spraying double Uzis cuz you know they think we live in zoos
The problem is with this everyone seems to be real confused
The niggas on the streets to the old people that watch the news
And watch BET and the crazy shit they see
They associate with you do the same shit to me
When you look at me you see just a nigga from the projects
But can't understand this nigga's mind set but still

[Black Thought]
Yo, a revolution's what it's smelling like, it ain't going be televised
Governments is hellified, taking cake and selling pies
I ain't got a crust or crumb, to get some I'd be well obliged
Murder is comodified, felon for the second time
Never was I into chasing trouble I was followed by
Facing trouble with no alibi, had to swallow pride
Vilified, victimized, penalized, criticized
Ran into some people that's surprised I was still alive
Look into my daughter's eyes, wonder how can I provide
Got to get from A to B but how can I afford to drive?
Messed around, tried to get a job and wasn't qualified
Had to see a pal of mine, got to get the lightning rod
Now I'm in the black Impala looking for the dollar sign
Palms get the itching man I got to get the calamine
Before I fall behind, guess the grind will be my 9 to 5
I will not be conquered by, I will not apologize 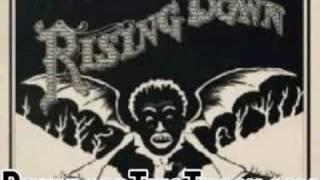