Stand by to switch on, we fire on all pistons
We're singing along but no one is listening
From dusk until dawn we stay up to carry the flame

And when it's all said and done in these alternate endings
When nothing is left but the stragglers and empties
We're sleeping it off just to wake up and start it again
So burn the statues to the ground, it's time to lay your weapons down
Bound for glory on this train but there's a bridge out up ahead
Noise cancel, drown the signal out
Change channels, manufacture doubt
When the only thing we'll fight for ever day
Is a better seat on a crashing...
Plain to see but hard to breathe
The streets are full of tumbleweeds

And now it's morning in the streets of amerika
But we don't go outside anymore
The radio blasts hysteria, with a television sideways on the floor

Because it's morning in the streets of amerika
And we don't go outside anymore
The radio blasts hysteria, while the television's sideways on the floor

With the teleprompter in our faces
We don't even know what we're saying
A car that's slowly crashing and we can't look away
Parading to the edge of a cliff now and trying to
Figure out how to get down while the night is fast approaching
Will we even recognize our former lives in this artificial light? 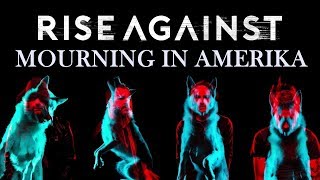