I learned and gained from my papa
Wisdom he taught me bout wealth, he said
If you gon' work for somebody, then you
Might as well work for yourself. It went
Over my head as a youngin, 'cause it's
Some shit you don't comprehend, if you
Forget everything I tell you, promise
That you'll remember this

Look
Um, Take me back to the one room shack
The house on Sack
Where it all originated
The entrepreneurship that you demonstrated
I listened to you every time that you was ventilating
Even though you thought I wasn't
Bob Marley tellin us to get up stand up
You taught me to stand up and be counted
But how you gon' be counted if you don't have your hand up
Hand full of green hair grease that you keep in your fro
I got the same soft hair I know I got it from you I love mom but her side of the family just seem to have nappy roots
But the blacker the berry, sweeter the juice
You told me about the struggle when you were young
West Oakland Projects and mayonnaise sandwiches
How the Black Panthers taught y'all about self defense
Being black is beautiful but come with its challenges
Told me bout your time at Coca-Cola
You were stressed out dealin with them racists
Which led to you beatin ass in the basement
You were never one to avoid confrontation
I probably get it from you
But the same roll led to a business of your own
Before cell phones you were runnin out the home
You was givin me the skills that I wouldn't understand 'till I'm grown
Now I understand everything you were on
Don't understand my siblings
And how they don't come around
'Specially with your illness
I think that shit's selfish
Why they act like children
You act like you don't hurt but I know you got feelins
I love that you're a realist
And never have you sugar coated anything
You been honest with the tongue of a guillotine
Know that everything you taught still lives in me
And every move I make is a result of all the energy you put in

I learned and gained from my papa (I love you forever)
Wisdom he taught me bout self, he said
Heaven is a state of mind, that's why
People be livin in Hell. It went
Over my head as a youngin, 'cause it's
Some shit you don't comprehend, he said
If you forget everything that I told you
Promise you'll remember this, like 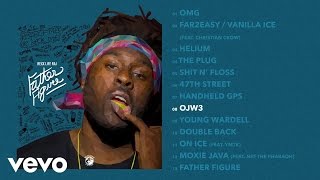