There’s a story that started on Christmas
When a baby was born in the night
And those who came far, who followed the star
Were seeing a heavenly sight ...
a heavenly sight.

Well the years hurried by, and the boy, now a man
Could make the blind see with a touch of his hand
He was born to be King -- he was Rabbi and Priest
But the best that he had, he gave to the least ...
He gave to the least.

Well he spoke like a prophet -- like no one they’d
heard
This simple young carpenter -- crowds hung on every word
He hated injustice -- He taught what is right
He said “I’m the way, and the truth, and the light.”

His friends soon believed that truly he was the one.
The Savior, Messiah, God’s one and only son.
But others, they doubted, they did not agree
So they took him, they tried him,
He died on a tree ...
He died on a tree.

God has made a way
for all who mourn and grieve
Death will never be the end
if you just believe. 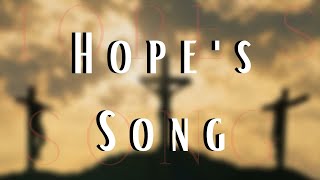 check amazon for Hope's Song mp3 download
these lyrics are submitted by kaan
browse other artists under R:R2R3R4R5R6R7