So, the first time I saw him was at the annual city festival, at the end of the plaza, on, uh, "
Punker Hill", also known as "
The Island of Misfits".
Um, It's like a mound of black leather and army surplus jackets and boots and spiky egg-white hairdos and mohawks and second generation Exploited and Minor Threat and Sex Pistols patches and stuff.
Basically a haven for the misunderstood punk-y, rock-y, goth-y, "woe is me" types

And, uh, there he was, right in the middle of it all.
Um, oversized yellow form-rubber cowboy hat; pink plastic Toys-R-Us pistols and holster.
Off-white dashiki, uh, shirt, and tattered bell bottom jeans, leather feet, Raleigh cigarette finger stains.
And he was an island within an island, and I just, kinda had to know more

So, I, uhh, I sat with him for hours just trying to get a bearing on his beautiful insanity.
Every third inquiry was met with, you know, an eloquent but unusual response, and, you know, the subsequent exchange, it kinda warranted continuing the conversation, because he was, he was interesting.
Uh, 'course the other, the other reason my efforts where dismissed, while he took in the constant flow of the festival crowd, all around us

A raging river of multi cultural river of music, art, food, families, uh, all of this with his Walkman at full volume.
I think it was Foreigner, playing through the headphones.
And I asked maybe, you know "
Hey maybe you could turn that down, so we can talk?", and he replied "
Can you hear me"?
and I said "
Yes", he said "
Well, then it's fine".
He never really pretended, not once, to be able to organize all of this chaos that was going on around us.
Uh, he just unapologetically chose which pieces to focus on Well, you know, after a few hours we seemed to have found our stride, found our rhythm, kinda settled into it, and we're having these intermittent conversations, uh, flipping back and forth between the chaos and the focus.
And then, just kinda out of no where, he seemed to become a little unsettled and disturbed.
And I asked him what was wrong and he just blurted out "
Keynote, parents and syrup", and then he looked at me like I wondered what that means, and then he said, "
You have any, do you have any batteries?"

So Basically his, his walkman was running out of power, and he just needed batteries, so before I could ever turn and ask one of our fellow punkers for some double-A's, he grabbed my face with both hands, and then for the first time in the entire conversation, he, gave me his complete focus and attention, completely present, and calmly said "
We will never know world peace, until three people can simultaneously look each other straight in the eye." 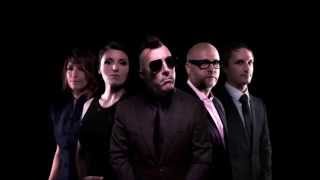