Regrettably he's sick, he's got swellings on his dick
And when he touched his dick, the swelling busted
Pus was splatting all over his face... what a grace!

Bacterial colonies caused the pain and brought decease
Screaming and yelling and bleeding and smelling
His foreskin is a pitted flap... musty scrap

The bitch he f*cked the day before was only for one night
Not more! Now he's pissing blood
And his balls just look like mud... that's what he's got!

Venereal disease
Rancid-tasting dickcheese, corrosive like acid
Burns holes in his skin
Crablike it is spreading over his pallid limps Shapeless is the dick and his glance is much too big
Riddled and defiled
A useless lump between his legs... soft like wax!

While he f*cked that slut he's got a finger in her butt
Digging in her shit
Her asshole was a fouling pit... what a hit!

He drank her p*ssyjuice, innocence is an excuse
Because even children would lick
Anything that smells so motherf*cking sick... metamorphic!

So he will understand, his lust has been his end
Now he is more intelligent
He'd better used his hand... no commend!
Explain lyrics
Correct lyrics 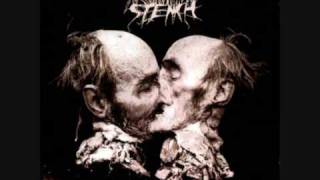