Burn Hollywood burn, I smell a riot
Goin' on first htey're guilty now they're gone
Yeah I'll check out a movie
But it'll take a black one to move me

All right fellas let's go hand out
Hollywood or would they not
Make us all look bad like I know they had
But some things I'll never forget, yeah

Many intelligent black men seemed to look uncivilized
When on the screen like a guess
I figure you to play some jigaboo
On the plantation, what else can a nigger do

And black women in this profession
As for playin' a lawyer, out of the question
For what they play Aunt Jemima is the perfect term
Even if now she got a perm 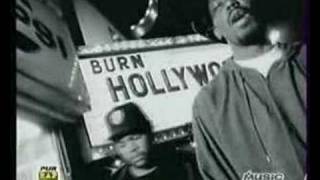