Mr. Lennon, Mr. Lennon!
John John, could, could I get your autograph?
Could I get your autograph? (Sure kid)
Oh, yeah yeah yeah, just
Could you sign this for me please? (Sure, what's your name?)
Thanks thanks, I'm a real big fan, thanks thanks
(Here you are) Thanks a lot!
(Intro: J-Hill)
Word (gunshots) uhh
Could do that, hot as hell though
Yo. yo, what, uhh. what
Bella {?} hop to this, what, uhh, uhh
Set it down dawg, what.
(J-Hill)
(ONE, BY, ONE) Rule one up in this bitch for real
Roll with a couple niggaz like Dave SeVille
Cause they'll, uh - clean you out like some golden seals
Put your hands up, give me yo' scrill nigga, uhh
(Obie Trice)
(TWO, BY, TWO) Your bucket is clean, you ridin mean
Pull up at the light on them Spree's (gimme that!)
School Craft wanna jingle your keys
Whatchu 'bout to do? Bleed!
(Proof)
(3, 1, 3) Y'all don't run the streets, the streets run you
Put a gun to your kids, "Art of War" Sun-Tzu
In the jungle stay humble or stumble and fumble
'til death inside a rumble
(J-Hill)
(FOUR, BY, FOUR) Rule four better get this down
Before niggaz gon' beef better have that four-pound (uhh)
And bust like four rounds, kick the door down
Get yo' ass up outta town nigga, uhh, uhh
(Obie Trice)
(FIVE, BY, FIVE) Niggaz connive, I thought you knew it
Your main man's settin you up nigga you blew it
Told him what you doin, nigga, you're ruined
You ain't knowin?
(Proof)
(6, 6, 6) The Devil's your man, the ghetto's your land
When you got knocked yo' block turned yellow and ran
When you got sugar, why settle for sand?
Never snitch when you clip and put your melons in cans
(J-Hill)
(SEVEN, BY, SEVEN) Rule seven kinda where my heart at
You want beef in the street? Don't start that
Cause we'll have some niggaz up in yo' apartment
Jumpin outta places where it's real dark at, uhh
(Obie Trice)
(EIGHT, BY, EIGHT) You're carryin weight, hey, but wait
A lot of hungry niggaz know where you stay
Address your address, change your place
before you spray nigga
(Proof)
(NINE, BY, NINE) I learned a lot from stank if you got bank
F**k buyin gats bitch, get a tank
F**k a firearm, get a wired bomb
Cause when you blow yourself up at least you dyin warm (explosion) Ten jewels

(Chorus: Proof, J-Hill)
Ten reasons, nine glocks, eight shots
Seven cops, six drop on five blocks (FOUR/FOR SHO'!)
Three cousins, two/too hot, one law, family
We put no man befo', ten jewels now tell 'em
It's one purpose, one goal, two halves
Get a whole, three niggaz, one song (FOUR/FOR SHO'!)
Five ways, six days, seven plus
Eight/A.K., we can let the nine spray y'all
(Proof)
(NINE, BY, NINE) Oh I'm not real cause I pop pills?
Bring your block to my block nigga get your whole block killed
Don't let the "Purple Pills" shit confuse you
One outta my hand, the life'll lose you nigga
(Obie Trice)
(EIGHT, BY, EIGHT) You lay at your wake
You was played, slugs struck the Escalade
Your brain rest on what Motor City paved
No more sunny days
(J-Hill)
(SEVEN, BY, SEVEN) Rule seven, some'in you better tell 'em
Good coke, good weed, y'all better sell 'em
Cause they'll put some'in up into your cerebellum
Proof, you better tell 'em
(Proof)
(SIX, BY, SIX) Assume it's only for conversation
Let's conversate, simple nigga the .38 indiff'
Mine'll set trip, empty out the clip
Hold up, a .38 ain't got clips
(Obie Trice)
(FIVE, BY, FIVE) Niggaz be live before they die
'til the test the wrong animal then they spirit fly
Just know the game while you playin the tough guy
That's yo' life
(J-Hill)
(FOUR, BY, FOUR) For all you niggaz think this rap shit's a joke
You get smacked and choked, bring the dagger and cloak
I put my f**kin heart into this shit that I wrote
You muh'f**kers on some dope?
(Proof)
(THREE, BY, THREE) Watch who near you, focus on your rearview
Outta life, yo the trife wanna clear you
Don't get caught on E and fought on streets
Be a victim of "Grand Theft Auto 3"
(Obie Trice)
(TWO, BY, TWO) Trust no one when you're gettin them
Put your life in perspective, you're killin 'em
Envious niggaz stay jealousy driven
Niggaz need to be listenin
(J-Hill)
(ONE, BY, ONE) It's one reason why I still let you breathe
It's one reason why the f**kin tec won't squeeze
It's one reason why you ain't go out like N*Sync
That's cause it's one other nigga that'll do it for me, yo
(Chorus)
(Proof) Ten jewels...
Explain lyrics
Correct lyrics 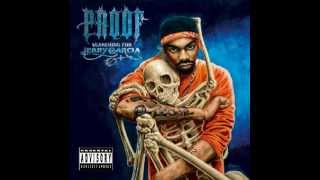