Own 2
Prhyme Rhyme Boss
Own 2 video

[Verse 1: Prhyme Rhyme Boss]
Yo, I was raised in Ann Arbor, barely had a dolla/
Barely had a father figure, praises to my mama
Was lazy then I got up, was lazy, yo got up -
To the hood I was fond of, man, I would make it out of/ (PLC)
Blazing marijuana then hit the Garden, how Olive/
We "TeamTakeOut" for them hard days, (without) that challenge-
I would probably be average, and NOT hungry as f*ck on stage just like a savage get paid, get ya cabbage/
It's like the feeling you get, when you realize everybody is feeling ya shit/
I just really hope that you hearing us spit/
That hip, hop rhythm it's as real as it gets/
Ayo, reality sets, and the streets got lots of failures and it's NOT gonna sell these same dreams as these a'capellas but/
Do us a favor my nigga and don't compare us/
We hot on these beats, ain't a lot you niggas can tell us/

[Hook]
You gotta stand on ya own two, no matter what you goin' thru/
This old head told me these words, man they so true/ Stay out the way, but do what you supposed to do/
And maybe, oh maybe, you can grow too/ x2

[Verse 2: Prhyme Rhyme Boss]
(Ever) since a pen was placed in my hand, I've felt it's relevance/
Drippin off, my sweat, see my plan was to reach intelligence/
As swell as my melon could get/
I remember hearing messages in the spellings, developed a wit/
And a sense of the devil's intent/
See it was evident/
For the selfish it's either Hell or repent, I been at it ever since/
Like, after every chick done been in my damn room- whether or not my dick up in her damn womb, it's hotter than cancun but Trent you a damn fool/ Why?/
Treating these women like they ain't life-givers, I just did what The Man do/
I did what I can't do/ And thats gamble, losin' the handle/
You know, that feeling, where you can't lose/
Why must I live through these lies? Is it because of what I was told?/
And now a nigga old, I'm seein' through different eyes/
I was told that the world is cold, a nigga ain't never lied/
Damn, man that nigga ain't never lied!/ 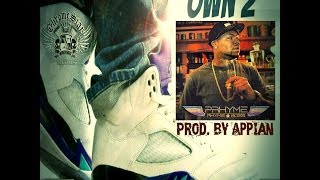 check amazon for Own 2 mp3 download
these lyrics are submitted by itunew3
browse other artists under P:P2P3P4P5P6
Record Label(s): 2013 Prhyme Rhyme Boss