We Hit Em' Up Too Lyrics

We Hit Em' Up Too Lyrics

*Yogi B*
First up waxed your ass in a freestyle battle
Punk snakes like you wanna bite but just rattle
Remember the time we met in 7 eleven
Givin' me love and you're huggin' on these nut you be rubbin'
Punk shorty I kept you on the same level
You had to be greedy and play me out like a little devil
Let the Underground know the kind of witch you really
You'll sell your own ass to be a superstar
What? now you got a family so tight
Same people you diss every other night
I guess it's all over now I heard the fat lady sing
Lady sing for drama is all she brings
Gave you a chance for fame and don't you deny it
I should have put your fat mouth a long time on a diet
"Watcha gonna do if I lost weighate ?"
I think I'll pass cos I still don't buy it
You wanna know where my fans at ?
All around you in Face On didn't you see dat ?
Believe dat I'm coming back to front you too
Cos back here hell We Hit Em' Up Too

*Point*
Read all about it, read all about it uh
Musclemutt just got dropped
What? Headline's Cryin' Shame, now everybody knows you lame
Your mind and soul's corrupted cos you punks want fame
I see your hearts filled with jealousy
Your hoochie has drippin' envy so you drop that backstabbin' treachery
Comin' up sayin' that you mad skills
But all I see is cheap ego thrills whack rhymes with no frills
So what the heck is moshy moshy coochie baby?
Now that shit sounds silly your dribblin' don't impress me Claimin' that you top freestyler
Your style's retro like Bonnie Tyler
You dissed my album cover bein' clownish but yours be worse
Cos your shit be lookin' something straight from the circus
For real though now you phat with that lady in your clique
Fake hellos and Dallas like drama now that's your trick
Remember the time we use to chill chattin' on the pc
But now it's just a messed up memory
Now shit went down ain't that a pity
Well it's just too bad baby, nuff said.

*C.Loco*
Hello everybody, I'd like to say I'm sorry
Oops! I lied now here's the real story
We hung out, I helped out, I lent you minus ones
Late nights on the IRC chattin' just for fun
So watcha want? You wanna see what I've seen
I've been where you been, remember SS 15
We were cool then, you had beef with the other peeps and
Now you got an album, you wanna skoo the nonsense?
Ha! Ha! You see my prominence is imminent
Why you tryin' so hard so be Eminem?
You visionary? More like fictionary
Shove claimin' to be all dat and suck my dictionary
You used to diss em, but now you kiss em
Deport the double K, fat lady gonna miss em
Now here's the flying line coming from the Hellstar
And if you ain't down then bla bla bla bla bla

Break 2 *Ronin*
Hey everybody hope you understand
How I feel cos you dissed me once you had the chance
Make my day if you feel you're half of me
I'm above you so too bad, too bad baby !

*?*
It's too late Bozos. You better realise where you standin' now.
Well it's time you've learned your lesson. But remember with an attitude like that,
you ain't goin' nowhere. I know you dumb enough not to catch my drift.
Cryin' Shame jeopardisin' hip hop on tha headline. Well people get what they deserve.
Cos we hit em up too. And I'm the ? 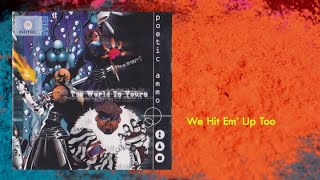 check amazon for We Hit Em' Up Too mp3 download
browse other artists under P:P2P3P4P5P6