It was in the third cycle of earth when the invasion began
A titanic force of ships filled the heavens and rushed upon the earth at
Unimaginable speed bitter shrieks filled the whole sky, shook it, and tore it
Open, letting in all the stench of hell the creatures were from another world
A tribe of nightmares of all shapes and bizarre deformities
They were a twisted, hunched mockery of the human form these backward,
Violent beings all hungered to cut into the flesh of humans their lust
For death was overpowering and their hands ached to kill and molest they
Travelled by the thousands through the galaxy in search of planets that
Would give them pleasure
Planets... like... EARTH!!!

Vestige light that glows, hostile entities
Fires sent from doom, the promised enemies
Darkness fills the land, terror fills your eyes
There's no escape from the creatures of the sky
(Destroy!!!)

Beat you to the ground, eat your burning flesh
The starving beasts of hell will surely will bring you death

The creatures descended from the skies by the thousands to rape and pillage
The earth men and women ran for their lifes - defenseless, terrified of
These foul-smelling creatures with bloodthirsty appetites.
All humanity was at war with these beasts for inflicting an unhholy reign of
Terror upon the world
Man had never before experienced a more gruesome terror than now, be eaten
Alive! their cities were burned, their women were raped, children tortured
And beaten to death. Not one man on earth was spared from their humiliation
Dead cities were moaning and crying for help. It would never come
The smell of blood choked the earth... 'till it breathed no more

The time had come at last, their thirst for blood was quenched,
For when they left the earth they left a bloody stench!
Up to their ships of doom to travel through the night
These bloody beasts of hell would find another fight
(Destroy!!!)

Sickness filled the land, survivors had no rest
Perils to endure, dangers worse than death
Trying to rebuild your world of blood and sweat
Visions filled your minds that you would not forget 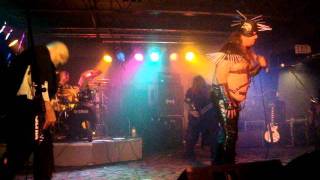