I press on the elastic sheet, I'm breathing through a slice

'Are the worms or are the serpents?' bubbles through the ice

The source was quite invisible, the ever-present voice

While skating, both legs tracing different shapes, I made my choice

Mimicking the image in whose radiance I bask

I'm tied to him, or him to me, depending who you ask

None the less reluctantly reflections tumble in

He's fallen on the ice, it cracks

Will he plunge in and join me here?

He meets my eyes, to my surprise

He laughs in full light of my frown

My double wants to pull me down

Slipping on the friction slide, my skin peels to the bone

The flesh I leave behind, is something that is not my own

I beg my mirror image for a moment with my soul

He's leaning back, time to attack, to see who's in control

He's throwing several punches, and he's blocking most of mine

Defeated now I sulk and squirm above the frozen heights

Waiting, calculating till he ventures onto the ice. 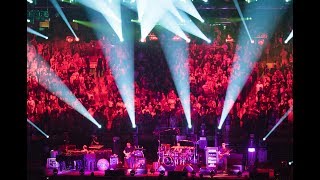 check amazon for It's Ice mp3 download
browse other artists under P:P2P3P4P5
Songwriter(s): Marshall, Tom Marshall, Trey Anastasio
Record Label(s): 1993 Elektra Entertainment, A Division of Warner Communications Inc for the United States and WEA International for the world outside of the United St
Official lyrics by