Mr. Palmer is concerned with the thousand dollar question
Just like Roger he's a crazy little kid
I've got the time if you've got the inclination
So cheer up Palmer, you'll soon be dead

The noose is hanging, at least you won't die wondering
Sit up and take notice Tell it like it is
If I were near you I wouldn't be far from you
I've got a feeling you know what you did

By that night, news of Palmer's death had traveled back to the camp. Spirits were low and Colonel Forbin felt devastated. Even though he had only been in Gamehendge for one day, he had already developed a deep hatred for Wilson. He wanted desperately to help the revolutionaries, but without Palmer, it seemed hopeless. He wandered slowly through the camp and passed Errand Wolfe, sitting by the fire with Rutherford, who had returned that afternoon. He walked on and soon found himself outside of Tela's hut. Forbin knocked and walked in. Tela sat behind a makeshift desk in the center of a room that was littered with small cages containing spotted stripers, a tiny three-legged breed of animal. The unit monster sat in the corner. The colonel took a step toward Tela and spoke. "I needed to come here tonight" he said, "to tell you that I've fallen in love with you." He looked to her eyes for approval but her face remained frozen in an expressionless stare. An awkward blanket of silence fell over the room and hung for a long moment before being shattered by the sound of the door swinging violently open. It was Rutherford the Brave. The ironclad knight rushed across the room and gripped the throats of Tela and the unit monster in each of his mighty hands. They struggled to break free but even the unit monster was no match for Rutherford's power and soon it was over. The bodies fell to the floor in a lifeless heap. Colonel Forbin stepped forward from where he stood in the corner unable to contain his confusion and rage and screamed "WHY?" His question was answered by Errand Wolfe who had quietly slipped through the doorway during the confusion. "She was a spy," he said, and explained to Forbin that she had been sending information to Wilson using the spotted stripers as carriers. Roger's death had aroused his suspicion, and Palmer's had confirmed it. The colonel stood in silence in a world that had turned up-side-down so many times that he no longer knew which way was up. It had all seemed so simple when he first arrived. G
Ood versus evil, and of course he had sided with good as he had done all his life. And now, he stood and stared into the eyes of Errand Wolfe and he saw evil. The entire picture began to seem like an enormous puzzle with one piece missing, and the colonel knew what that piece was. "Within twenty-four hours," he said to Errand Wolfe, "You will have the Helping Friendly Book." And even as the words were leaving his lips, he found himself running out the door and into the forest, not towards Prussia, but toward the great mountain looming in the distance. 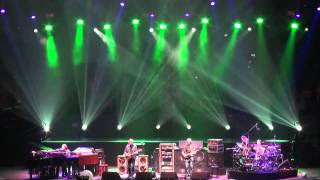 check amazon for Ac-dc Bag mp3 download
these lyrics are submitted by kaan
Songwriter(s): Trey Anastasio
Publisher(s): Who Is She Music