The sun of him who knew thee not Has set, O Amon. But, as for him who knows thee, He shines. The temple of him who assailed Thee is in darkness, While the whole earth is in Sunlight. Who so puts thee in his heart, O Amon, Lo, his sun hath risen.

The new ruler, performing benefactions for his father Amon and all the gods, has made what was ruined to endure as a monument for the ages of eternity, and he has expelled the great criminal and justice was established. He surpassed what has been done previously. He fashioned his father Amon upon thirteen carrying poles, his holy image being of fine gold, lapis lazuli, and every august costly stone, whereas the majesty of this august god had been upon eleven carrying poles.

All the property of the temples has been doubled and tripled and quadrupled in silver, gold, lapis lazuli, every kind of august costly stone, royal linen, white linen, fine linen, olive oil, gum, fat, incense, myrrh, without limit to any good thing. His majesty (Life! Prosperity! Health!) has built their barques upon the river of new cedar from the terraces. They make the river shine.

To reach Tel-el-Amarna, drive eight miles south of Mallawi to the point where you cross the Nile. On the east side of the Nile the distance is less than a mile and can be covered on foot or on donkey.
Behind the present village, at the ancient site of Tel-el-Amarna, the ruins known as the palace of Nefertiti are among the very few remnants of the Akhnaten period. Tablets in cuneiform writing, which contain correspondence between Egypt and Syria, were found here and are now the the Cairo Museum. (To see any sights on the Eastern bank of the river you must cross by ferry which carries cars along with the usual donkey carts and local traffic. The ferry docking station is located at the southern end of the town. You should arrive there at least one-half hour before the 6:00 AM crossing. The ferry does a brisk business and you will need every available second for sight seeing.)

There is nothing left of this glorious city of temples and palaces. The mud brick buildings have long since crumbled and little remains of the immense stone temples but the outlines of their floor plans.

In addition to the tombs and ruins of the city, there are several stelæ scattered around the plain which mark the limits of the land belonging to the city - most of them are too widely scattered to visit and are also in bad condition. 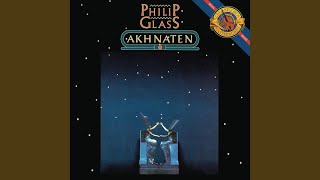 check amazon for Akhnaten: Act Iii Scene 3. 'the Ruins' mp3 download
these lyrics are submitted by kaan
browse other artists under P:P2P3P4P5