Sleepwalkers standing on marshy ground,
they won't fall if you don't wake them up.
The icicles on the old judge's beard
won't tell him what he is guilty of.

The mummy and the ghost,
making a special toast,
drinking through saturday –
his last dance is almost over.
A menu with no choice,
he didn't raise his voice;
a carrier pigeon lost a message on its way.

Fighting a lion – his executioner – making silver ripples for the audience.
A wasteland would be the only nest for a bird who tries to fool the rules. He never did no wrong.
He stayed a bit too long,
small change could buy him time
and a princess in a magazine.
She sure put on some weight,
but people stil think she's great;
a carrier pigeon lost a message on its way.

An evil witch told him about the club,
but he was only searching for the perfect rhyme.
He never cared to jump on the donkey's back and the bouncer is the first to stand in line. 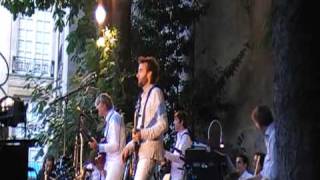