Harry Simms was a palomine, we labored side by side
Expecting to be shot on sight, or taken for a ride
By them dirty cold operator gun-thugs, that roamed from town to town
A-shooting down the union men, where e'er they may be found
Harry Simms was walkin' down the track, one bright sun-shiney day
He was a youth of courage, his step was light and gay
He did not know the gun-thugs was hiding on the way
To kill our brave young comrade this bright sun-shiney day

Harry Simms was killed on Brush Creek, in nineteen thirty-two
He organized the miners, into the N.M.U.
He gave his life in struggle, that was all that he could do
He died for the union, also for me and you 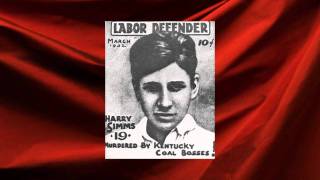