[Intro]
Come one now, y'all know I was coming
Y'all just ain't now when
That was a cheap shot, now I gotta get you

[Verse 1]
Big Sean's album is trash, it sound wicked
In fights I be swinging like Will and Jada Pinket
“Papoose, who?” Boy, I'll give you faceshots
I'll leave your eye puffy like the nigga who made Ma$e hot
All of your dogs is straight dogs, y'all get straight shots
Bastards, I spit ACID they need Maalox
Kanye wore a skirt what was he trying to prove
Y'all be following the illuminati rules
Carry yourself like a man, and you will fail
Play a bitch, you prevail
The only time they want the black man to show his strength
Is during sports, outside of that they want us to be soft
So Big Sean speak like a woman when he talk
When he having a seat he keeps his legs crossed
We can't blame him, it's really not his fault
This is the feminization that he was taught
You ain't a man take that M from your mannerism
You brain dead, I just gave you an aneurysm
True and livin, god cypher divine, use your wisdom
Whenever I'm reciting a rhyme the proof is given
Using Biggie's name, who gave you permission?
You look like Ralph Tresvant from New Edition
Gifted, I shoot the gift, no curse
Every time they play Control they skip your verse
Little bitch how much change you got in your purse?
I'm 'bout to lift your skirt
It's a difference between great music and GOOD music
Y'all ain't good with me
How the f*ck they put your album out before Pusha T?
I figured out why you're so skinny then I got over it
Pusha must be selling the crack and you smokin' it
Anorexic describe the way that you spit
On your album cover it look like you taking a shit
Behind the green curtain, the same color as Kelis' dress-
On Nas album cover, you a complete mess
Is that a indirect or you just a copycat?
Cause he killed you on your own album, he bodied that
Got the audacity to say your better than Drake
And out rap Jay Z, what a level of hate
Those artists made you hot, go ahead and give grace
Worst Clique verse, they should spit that in your face
Your biggest record was called A-S-S
Nicki Minaj made it hot, you way less fresh
I heard you Ye yes man who get paid less checks
So when Ye ask a question you just say “yes yes” You cocky for no reason like you making mad noise
You got your style from the original Bad Boy
B-I-G, why you said that shit?
Always saying “Boi!” that's Craig Mack's shit
Still in New York? you better head back, bitch
Red still ringing, let that red Mac spit
First chain, don't make me laugh lame
In Brooklyn that would'a been your last chain
Said you stay on your toes, damn that's for ballerinas and girls
You should stay grounded, keep your feet on the floor
Miley did your video without you even
I saw your interview couldn't give a good reason at all
Lost on your first single, you was fiending the draw
Attention to your project, she even th score
She illuminated your album, you was fiending for more
Prostituting for the press, you a media whore
Mentally you a virus, part of the reason we lost Hannah Montana
Now we stuck with Miley Cyrus
Talking 'bout you hall of fame but you and Ye is all the same
Share a verse, wear a skirt place them on the wall of shame
When they name lyricist they don't never call his name
So in every interview you hear this f*ckboy complain
Never walked the subway tracks in the pouring rain
With a can of spraypaint, just to tag up on the train
Never seen a movie breaking Beat Street, Krush Groove,
Style Wars, Wild Style, damn you a f*ck dude
Ain't hip hop in a lot of ways
Never walk with a Walkman, your first headphones were Dr. Dres
Sean I get at you, ready to attack you,
Last name Mack and you, you gonna call me Papoose
Right on my hand I got my whole city tattoed
Five burroughs of death, don't make me back smack you
King of my castle, get out of here, skedaddle
Eyes on the prize and my ears to the gravel
Niggas like to tattle, shotty double barrel
Brains on the windshield, Caine cousin Harold,
I carry the torch like a motherf*cking statue,
Shitting on these rappers I don't even need a bathroom
They probably never had you, know the man who craft you
Big head scientist, go by the name of...
Oh you spit a mean 16, I can match you,
Well I spit a M-16, who wanna battle?
Papoose who? World Health Organization,
Papoose who? You a owl or you hatin'
Who? you know who the God is, stop fronting, never say who
Who is a rock group in London, ha ha 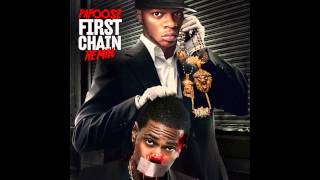 check amazon for First Chain mp3 download
these lyrics are submitted by BURKUL3
browse other artists under P:P2P3P4P5P6