Well it's the M - I - crooked letter, ain't no one better
And when I'm on the microphone you best to wear your sweater
Cause I'm cooler than a polar bear's toenails
Oh hell, there he go again talkin that shit
Bend, corner's like I was a curve, I struck a nerve
And now you bout to see this Southern playa serve
I heard it's not where you're from but where you pay rent
Then I heard it's not what you make but how much you spent
you got me bent like elbows, amongst other things, nut I'm not worried
Cause when we step up in the party, like I'm out-you-scurry
So go get your f*ckin' shine box, and your sack of nickles
It tickles to see you try to be like Mr. Pickles
Daddy fat sacks, B-I-G B-O-I
It's that same motherf*cka that took them knuckles to your eye
And I try, to warn you not to test but you don't listen
Givin the shout out to my Uncle Donnel locked up in prison

Now, my oral demonstration be like clitoral stimulation
to the female gender, ain't nothin better
Let me know when it's wet enough to enter
If not I'll wait, because the future of the world depends on
Therefore, if not the child we raise gon' have that nigga syndrome Or will it know to be the hard regardless of the skintone
I really feel that if we tune it, it just might get picked on
Or will it give a f*ck about what others say and get gone
The alienators cause we different keep your hands to the sky
Like Sounds of Blackness when I practice what a preach ain't no lie
I'll be the baker and the maker of the piece of my pie
Now breaker, breaker 10-4 can I get some reply?
Now everybody say...

Everyday I sit while my nigga be in school
Thinkin about the second album at the Dungeon shootin pool
Like E-S to the P-N, cuz we adjust to the beat in the zone (zone)
Honey I'm home but I'm not married
Carried a lot of problems around being fustrated
And now I'm sittin at the end of the month I just made it
Like you made the B team
And like the daddy's wife you makin the coffee
You heard the A-T-L-iens
So back the hell up off me 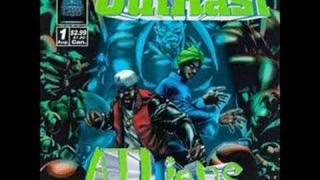