eLyrics O On My Honor Lyrics

The Footholds
On My Honor
Pass The Powerchords What Happened To You Win Or Lose Building Houses Out Of Sand Your Victory Pan Song Party On Wayne! Everything Between Make A Move Nice Guys Sleep Alone
The Footholds video On My Honor twitter


This could've been a train wreck
A total disaster
The end of everything that to this point mattered
Nicks and scraped and fatal falls
Private breakdowns and tearful calls
Not so private now, but wasn't that the point?
To get this story out?
We knew this would hurt
But never knew how loud

Didn't mean to be such a let down
Didn't think I'd ever have to say,
I'm oh so sorry but I'm not sure I have
What it takes anymore.
Or any faith in me
I just know I'm more vulnerable
Than I ever thought I could be

It's probably the best that I could say
If I'm too old, weak or late
This all falls in your lap And I don't know how to feel about that
What qualified me for this?
Taxing attempts at a positive influence
That I've distorted
That I'm still hoping to have

Can't look at this like a let down
Knowing the impact made
On myself
On anyone tied to me
Throw it away
The thought that things can be the same
Eyes ahead, with past outlines empty and tucked away 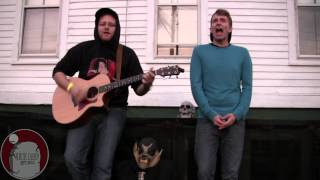