[Verse 1: Earl Sweatshirt]
It's the pick of the litter
Mobbin' deep in the woods with six other niggers
Yellin' at the trees like hey, hi mister
I'm Life Litter's official stripe getter
Dig this, I'll get a shovel and strike sisters
And kick them when the handle starts diggin' in my
blisters
Sick, cynical, cyanide spitter
So when I kick rhymes, my victims die quicker
I'm broke, no cheese, my ho's cracker
Snort third verse of Pidgeons, I'll show you a dope
rapper
I'll shit on a nigger with no bladder
Then throw it in his eyes to show him he don't matter
The night creeper in a nice white Jeep
Here with three white divas who snort and like penis
I'm hotter than at least five heaters
In the middle of the summer with a sleeved wife beater
Pure bred degenerate, gentleman
Little Aryan nigga with hairy clit for dinner
It's Wolf Gang, triple six, niggas on that simple shit
I'm on a f*ckin' spree burnin' bodies in a rental whip
Wolf Gang rad, no bum ass shit
So since the fans laggin', now they're tryna come back
quick
Ask from Dera to Fax, they say f*ck that shit
We half African swaggin' of course we run that shit

[Verse 2: Mike G]
I been sick, since I was un-mixed and mastered Blast them bastards screamin' f*ck another rapper
O.F. soldier, Buffalo Bill, don't think I will
But I'm a gunner for the Bills like Tasker
I'm the cream of the crop
Officers in the trunk with six other cops
No way that I'll stop, they'll arrest me after
Fix the scene just to put me on screen like an actor
Shit, no need to tell me I know it's hot
As weather where them bitches wear bikinis with polka-
dots
It's overly overkill, because my niggas know a lot
About tapin' them, rapin' them, throw them overboard
from a yacht
So now they probably hate me but that's why the f*ck
I'm here
And you really should man up, there's no need to be
sincere, faggot
Heard that you we're queer, why would you f*ck with
Wolves
That'll leave you on the ground like your rap career?
So you don't want it don't start none
We're f*ckin' Radical, been f*ckin' Awesome
Talked a lotta shit so for words you're at a loss
Raised enough money just to get someone to kill my boss
Now that's a f*ckin' suit for hire
Hang her higher, light a fire, f*ck my former
supervisor
I'm the truth, you're a liar, blue as clues, I inspire
Odd Future muthaf*cka, I'm your new supplier 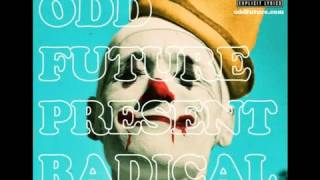 check amazon for Cool mp3 download
these lyrics are submitted by kaan
browse other artists under O:O2O3