The Forgotten Ages Of Victories Lyrics

The Forgotten Ages Of Victories Lyrics


The thunder of the drums is heard and cattle herds are driving back.
Sunset is driving near,
The heat of hoofs - all around melt away
in the shaggy beard of great and wise elder sunset.
The forests and the mountains surrounding the village
he covers by golden cloth - the night is drawing near.
Bonfires blaze up and the flame tongues raise up
to blacken sky like hands.
The hearers faces are visible through the flame.
The grey-haired elder opens the secret of his past,
through night and fire his word again find the youth.
His face covered with wrinkles like waterless earth
shined with life as in his youth.
And his tale was drifted through the time
to distant faraways of those days.
When the steel was like continuation of the hand
and the warriors were not afraid of their enemies power -
then moon was shining brighter and sun warned more times than nowadays.
The forest has been lighted by thousand of bonfires,
it have been seen that celebration has begun,
and singing drowned the noise of the wind
but (the) elder continued this tale.
When the valor and the honor was valued oved lie and hypocrisy,
when the pride and the eminence was valued over the slavery and the cowardice.
The enemies cities and villages were on fire!
Blood and death, screams and mourns - Hell came out!
The honor and the praise to power.
The beat of hoofs and crunch of steel,
the scythe of death flied over this field,
eyes were looking into eyes and heavens were on fire!
The warriors heart melted and tears appeared in the old eyes -
the tears of the real master.
His hand is clenched in the first,
the teeth was gritted as that time,
the ages of victories are over.
It's now time to wait.
No sooner that the sun get out of continement
and the first rays let the birds know that the day had come.
No sooner that the herds were driving on the pasture
the hair of the old warrior was streaming by the breeze.
He'd been looking at the faraways
and didn't find that the celebration was over.
His thoughts were with those far times.
Like a cold shudder passed through his skin.
He rose and returned back to his house
not left by the memories about those distant times.
The honor and praise to power!
The forgotten ages of victories.
Explain lyrics
Correct lyrics 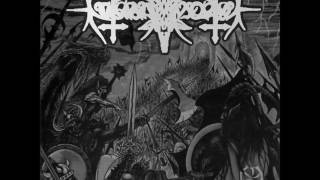