[Verse 1]
Look, don't ever talk about the shit I'm 'bout to do
Don't ever lie to hoes, I just tell the truth
Don't ever put the p*ssy on a pedestal
This money is the motive, everything after the revenue
I swear to God that's what you'd better do
'Cause in this life, it ain't no tellin' what's ahead of you
These niggas done went Federal
From young niggas killin', it's all sectional
Now this is the reality we wrestle with
Where every nigga down to die for what he represent
Where every murder is a mission rooted in revenge
You make it out and want peace, you set precedents
And then you start accumulating presidents
You lookin' like a legend, especially when your record spins
And you pull up in a 6 with a set of twins
Ain't like I never thought I'd see you in the set again

[Verse 2]
I swore to tell the world if I made it out
The truth about these LA streets and all that they about
The paranoid emotions, will they stake us out
When we pull up thick in some foreign shit out Geisha House?
The losses that we took when they raided the house
The bitches that I sent when I laid it out
The only important thing is the paper route
The model, I embodied the prophesy as I played it out
Look, smilin' faces rockin' diamond bracelets
Murder cases, duck probation when your pockets major
I'm stuntin' in somethin' that cost a lot of paper
I ain't f*ckin' with nothin' that don't look like a spaceship
Look, now that's the realest shit I ever spoke
Pull up at the shopping centre with a centrefold
My windows up, my ceiling's closed
Choppers still owe me if you didn't know, nigga... 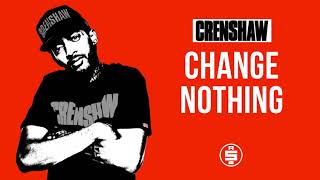 check amazon for Change Nothing mp3 download
these lyrics are submitted by BURKUL3
browse other artists under N:N2N3N4N5
Record Label(s): 2013 All Money In No Money Out, Inc
Official lyrics by