[Verse]
All these flavours, I turn the block into LA
When it's time to ride out, there ain't no hoppin' out like Trey, uh
Went from goin' halves on a D to flippin' keys
From a City of God's, I come like Lil' Zé
I was bullying the block like I'm Deebo
They're wifing bitches like Ginger from Casino
My plug's got a private jet when I order snow
So I ain't lyin' when I say I know George from Blow
So tell me, how can I quit the game?
Feel like Frank Lucas when his first shipment came
This week's the BRIT awards but I really can't go
Cah me and Bunz is like Chris and Marlo
Cop my mum a house now I'm out of the game
And the garden got a little summerhouse, like Dushane
Used to treat my home like a chemist
Sleepin' with 'caine like Jada Pinkett and don't be a menace, uh
I come like Nino if he didn't snitch
It's f*cked up what Rico did to Mitch (f*cked up)
I was the man when I was seventeen
I feel like Pablo out in Medellin
I'm in and out the country all the time
But I still run the hood like Bumpy Johnson in his prime, uh
And even when I quit the game, I'm still a shotter like Mad Max, Biggs and Wayne
They threw me in jail just for shottin' weed
Still had the wing shook like Chopper Read
My nigga Midgy's never been to prison I'm like Lucky Luciano, I'm the head of the commission, uh
I really sell packs, f*ck this rap shit
Get your diamonds snatched like Brad Pitt
Me and Wacky fly around the world just to shop
So like that nigga Capone, I third world cop
I'm New Jersey, drivin' a car chase
Man will let off more shots than the last scene in Scarface
Opps talkin' tough but I'm the nigga that they avoid
I ain't tryna do life like old Ray and Claude
I got yay, weed, anything that they need
Fam, I'm in too deep, I come like J. Reid
We hit a move, now the hood's jealous
But Nina got a cut like Paulie in Goodfellas
Coulda lost hope, all this f*cked up shit I seen
But there's light at the end of the tunnel like Wakeema
Guess I'm like Franklin over that stove top
Really bought ice creams for my whole block
So holler if you need that straight drop
One ate the block like beans and state prop'
The whole world's gone crazy, I can't live here
Probably move back to Africa like Sensei
Picture me in the Benz
Feel like Vito when he went back to Sicily for revenge
I don't like the San Andreas map, I turn your whole block purple
And I'll rob your crop like me and Queen's in crop circle
It's Nines
Explain lyrics
Correct lyrics 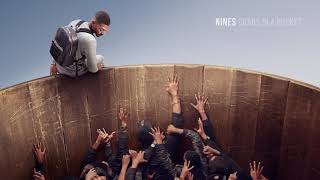