Pray For Him (eminem Diss) Lyrics

Pray For Him (eminem Diss) Lyrics (feat. The Black Squad)

[Verse 1: Charlie Clips]
Lord forgive us I know that it's kind of wrong
For five brothers this talented to be on one song (Facts)
But that white boy is nice (He is)
But he crossed the black man, Lord Jesus Christ (He gotta go)
We gonna pray for him, and move Hailie out the way when we spray cans
We don't shoot kids and women, we shoot and amen (Amen)
Look that double entendre kinda heavily (It was)
Damn, Em', what you like five minutes away from seventy? (Hah)
Oops, I meant forty-seven
Send them to Hell if he bought it heaven
Strappin' the dynamite word to Floyd and Evans
I get the grip with the clock, he better call a reverend
And give Eminem falls and knock him out his Jordan 7's (Woo)
Oh, you got your own sneakers, that's okay (That's wassup)
We'll let you know that Wild'n Out out Jordans is on the way (Facts)
Nah, I ain't do this verse for the fame or the clout (Not at all)
I did this verse to say keep my brother name out your mouth

[Verse 2: Hitman Holla]
I mean at this point it's bullyin', 'cause I know he ain't gon' clap back
So I don't be dealing with these rap cats
I'm the best and that's that, put that on everything
Get my CashApp, a bunch of red rags and black lacks
Incredible, they catch me with this, I'm going federal
I've been a star, your favorite actors wanna get sexual
You've been afraid Em', this ain't that renegade, Em
Where you ain't purp'd up, you're sweeter than lemonade, Em'
Black Squad, you won't link with them
See, you tried to bully P!nk and them
Britney Spears and NSYNC and them
And got the beefin' wit Ja Rule with the cops behind you
And every show since '04, you've had the strap behind you
Man, y'all find a all time great in a small town lake
I hawk 'em down with the cake
Don't you got a cash flow, what the f**k you mad for?
Subtract you and a casket, that's the aftermath, ho, Holla

[Verse 3: Conceited]
Hi Slim, let's kill it with all the chit-chat
Eminem, but you get the sticks, now that's a KitKat (Kat)
So, weigh damage, you medics, you ain't Cannon
And all them pills you stay crammin' still givin' you brain damage (Brain damage)
Your guilty conscious told you, you was the man and all
But now you're just a circus act, 'cause you stay up on cannonballs (Balls)
You always hide in your trailer, we know you big mad (Mad)
Get your bitch, to run in the lap, 'cause this is gym class (Woo)
'Cause all my niggas just stand up like Sinbad
Big Mac in the can that get rid of slim fast
Instead of stayin' in the booth to get your rhymin' out
It's season 15, here's your invite to Wild'n Out

[Verse 4]
Ain't no bad-doin', 'cause all of my truths thorough (Thorough)
Ain't got no bitch, Glock Nina, my new girl
I'm sick of all my homies keep dyin', might puke Earl (Eugh)
God should've took Em' and just let us keep Juice WRLD
Look, Nick, my brother, you dissed him, that gotta suffer
I told him "Don't diss you back, let us handle this motherf**ker"
Look I scratch the serial number off of the baby llama
Em' ain't seen a ratchet this dirty since his baby-mama

[Interlude: Nick Cannon]
Goddamn, y'all niggas ain't had to do him like that
Shit, when we do it, we over-do it
You play f**ked up games, you win f**ked up prizes
All this cocaine out here, and you wanna put your nose in my business
Told you, I ain't have to rap on this motherf**ker
You know what? I'm not gon' wait
I'ma just do what you did

[Verse 5]
You used to be in a position to talk to kids and they listen
Are you a politician? You voted for Trump, bitch, admit it
They used to call you a menace and that shoe fit you wore
But now you gettin' facelifts like an Instagram-whore
Used to be the king of the world, Ludacris, [?] lyrics
Now all you do is just growl
Maybe you got tourettes, and the sterics
Maybe it's your mommy issues
Maybe your white double spirit
He made the original music that your fans used to cherish
Now you debated, disputed, hated
And viewed in America has a motherf**king drug addict
You never be a Legend (Marshall)
Em' you should really start to stare at who's in the mare
Look at all the f**king botox, bitch, I know you're embarrassed
f**k all the tricks and the gimmicks
You like the new white supremacist
Sayin' the same f**kin' sentences
Nigga you ain't no lyricist
Lam, blam, flam, flam, take xans and train xans
I bet you never thought the kill shot will come from the cannon, blaow
You used to be a renegade 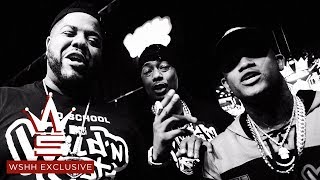