They Came From Space Lyrics

They Came From Space Lyrics


A Goblin planet, light years away.
Mankind shudders at the thought of the day:
When they came to earth, seeking food!
Seeking a new home for their vile brood!
Planet of fleshy resources untapped.
There was no escape, the humans were trapped.
Goblins on left and goblins on right -
Look at the cities f*cking ignite.
The people of earth, look up at the sky,
Screaming in horror, the children cry!
What're these monsters, from where did they fly?
DIE DIE DIE!
[Chorus]
From the edge of the universe goblins came;
Cooking the humans in eternal flame, All over the world, in every place,
The goblins came, they came from space!
Sending in soldiers to die by the sword,
We stand no chance against the horde.
Killing the beautiful, killing the freaks,
Charging the cities with deafening shrieks.
A flood of goblins to kill them all
Gathering weapons and storming the halls
Castrating children just for their balls
DIE DIE DIE!
A planet of humans, light years away,
Show those bastards, make them pay.
Board the ships, charge the lasers -
Stuff their young in cradles of razors! 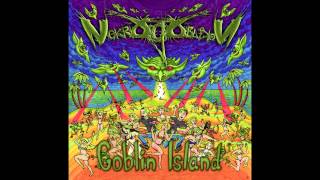