They came from the dark...
They came for flesh...
They came from space...
Goblins!
Through the streets, the goblins marched,
Thirsty for blood, throats were parched.
Killing the old, enslaving the young,
Eating our flesh with forked tongues.
They sailed away on a ship of doom,
The hold below a gory tomb -
Prisoners of war,
Held with no mercy!
They came from a land ebeyond our world...
(An evil portal of goblins unfurled)
Capturing slaves and raping the land...
(They came from a place that was covered in sand)
They came to earth with murderous thoughts...
(What was this place? and why was it there?)
Goblins are crawling out of their lairs!
Goblin Island: The place where goblins are born!
Island of goblins,
Where humans are treated with scorn!
A magical island in outer space...
The filthy home of the goblin race!
I sing my woeful tale about the fate of man
And the goblins rise to power; destroying everything.
They rape us, they kill us, and then they consume our souls.
We fill their gut, build their huts -
Forced to worship their lord.
Human remains in a goblin crypt,
Bodies skinned and clothing stripped.
Filling the earth with stinking rot,
Boiling the brains in a giant pot.
The feast begins; the island rejoices,
So many parts, so many choices!
What should I eat? Humans for supper! 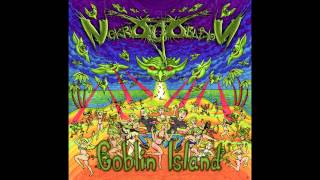