Goblins fight!
For endless night!
Swords pierce the armor, extinguishing light!
All will die!
Scream at the sky!
Bleeding on the battlefield, carcasses lie!
Running defeated, they never look back.
Mankind dies in the abyss of winter.
Armies of goblins flank their attacks,
Losing ground, shields turned to splinters.
Goblins away! Longing to crush them, to make them pay!
Screaming in rage on the dirt and the clay!
Slashing with glee! Pounding in faces and smashing their knees!
Sinister art form of human debris! Horrible sound! Crunching of bone and twisting around!
Enemies cry and wish they had drowned!
All of them perish, hot blood on the ground!
Gossammer nightmares to poison the mind,
The spear and the ax to help them to find,
That magical feeling of terror we like.
Killed in disgrace, impaled on a spike.
Columns of goblins, shredding them all.
Hope is lost for the weakened mortals!
Caustic smiles bring a funeral pall,
Clouds closing in on the dark horizon.
NOOOOO! 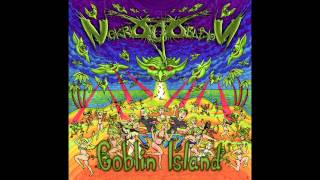