Sucks n' Artillery
Step by step, walkin' through the city
maybe I'm lonely but not alone
Lots of women walk around the streets: fresh flesh for my
gun.
I've seen enough, maybe I've seen too much
I really didn't like what I saw...
Nothin' can feed the hunger, but I really ain't goin'
back home...yet...

Chorus:
Thrash Metal wonder full of gasoline,
An Heavy Metal motor that I never kept clean!
Some kind of dirty song and dance is what I need:
Sucks'n'Artillery (x4) I never run from the things I fear ...
The only thing I fear is running out of beer!
Gimme your money, gimme your time,
Two hours an'an half in a Metal Paradise...
Ehi, ain't you thirsty? I still got some booze,
The "hot and willing" kind that I think you won't refuse!
Don't turn aroud, don't even want to see your face,
'cause a black Cupido never leaves a trace... 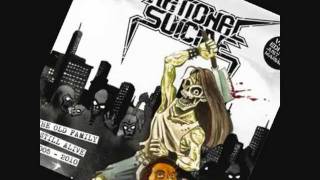 check amazon for Sucks 'n' Artillery mp3 download
these lyrics are submitted by kaan
browse other artists under N:N2N3N4N5