Well, of all those seven deadly sins
I wore around my neck for him:
Hunger, Anger, Lust and Greed,
Envy, Pride and Jealousy

There was one, I guess, that was the worst of all,
that gave a little push,
started the fall from grace that I took so hard,
I took so long, so long and far.

But I just couldn't spend me another night
in the cold, cold bed of the butcher's wife,
so afraid to fall asleep, afraid to wake,
and afraid to dream.

No, I just couldn't stay, I couldn't wait it out
and bite my tongue for another hour,
one more endless day,
day after night and night after day.

Well, it's been a two-year stint in no man's land. Nobody here really gives a damn
so why can't we call it a draw
in the bloody war to end all wars?

Well, I'm far too quick with the poison pen,
can't believe I'm writing again after all these goddamned years.
And someday when the ghosts have all gone home,
far too late to be rattling bones, then will you lay me down,
lay me down? Oh, will you let it be? 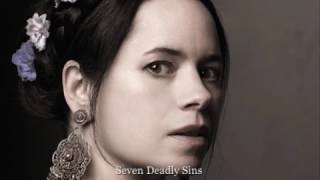