[Nas]
One 44, two 45's
3 loaded clips, 4 niggas roll, one nigga drives
500 Benz, 6 reasons why
This kid should die
We shootin every motherf*cker outside
Pulled on his block, jumped out the car, guns in our hand
At the same time everybody ran
There that nigga go, hiding in the crowd
Let the trigger blow, 7 shots now he lying on the ground
Blood on the floor
Then we shot some more
Niggas he was with
2 niggas hit, one nigga fell
One tryed to run, go get him son
Make sure he's done before we bail, i aint trying to goto jail
Must handle beef, code of the street
Load up the heat, if these nigga think they could f*ck around
Real niggas do real things
By all means, niggas knowin how we get down.. It goes......

[Nas]
Driving through roads, Suburban Chevrolet
6 tinted windows, and I'm on my way
To get up with my hoes, I pull up to they house
Not a freak to be heard, nobody came out
Ringin the bell, where in the hell
Could they be at, I'm about to leave Steppin' slow, where my truck was at
Who the f*ck is that?
Could it be a jack?
Now pull my strap, it's my man
And we have the same plan
There them bitches go
Civic '94, looking funny though
Open up the car door, funny smile
f*ck 2 already, 3rd ass was heavy
"Nas this is Sherri, Sherri this is Nas, and his man. Ready?"
Walked in the house, snatched off they clothes
Ran through them hoes
Plenty ice, that they all seemed to like
Can't find my man, heard a blam blam
Now I'm wonderin, "In this scam, do I even stand a chance?"
He killed the hoes, took all they doe
Fire in his eyes, higher than the sky
Comin down the stairs
Now he wantin mine, reachin for my nine
Aiming with our guns at each others face, at the same time
my nine on his lips, his fifth on my chin, I start whispering
"Put your gun down, we can skip town"
Rocked him to sleep, pushed back his meat
Lift off his chain
Took his shit, emptied out close range... 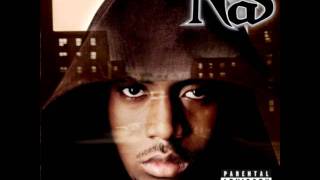