This is a journey into the worlds most largest
And notorious projects, Queensbridge
Listen while Nas saves his hood from the most
Cowardest rappers

[Nas]
He held a mass appeal and a little boy smile
Depressed has a complex his mouth was foul
You need to stay around I feel like telling some stories
First theres this arrogent f*ck, his names Cory
Hung around my mans Like and Big Trevor
Trevors still locked up, Likes getting his cheddar
Cory changed his name to arr, whatever
Cornchip, Buckwheat lookalike, its Mega
Right Mega was his name sorry about that
But its so hard to put a cowards name in my rap
Always acting tough, a jokester be fronting
He got snuffed, he got shot in the thigh, he did nothing
But thats Nas always looking out for breadrin
Cause when brethren don't return love it don't stress him
Cause gangstas do gangsta shit, real recognize real
Still laughing to the bank and shit
Back to Cor, got him a deal but his rhymes was whack
Def Jam mad that he signed the contract
Now he got jealous and mad at my shine
Making silly tapes, I'm always on his mind
Nonsense, not to be obnoxious kid
Mega for the record you could suck my dick
Bitch you from around the way its sad what this do to me
But Queensbridge, we gotta have unity

[Nas]
Since we on the subject of traders and flunkies
Mega aint the only faggot in my hood dummies
Theres plenty that wanna be me but cannot
Its like King Arther and Knight Sir Lance-A-Lot
Lefty and Donnie Brasco, Gotti and Paul
Before I woulda told you Prodigy's my dog
Through the ups and downs, robberies and all
Though I always knew he wanted my downfall
He would say his little slick shit and act real funny
For what nigga you're butt and it got back to me
Asking a Braveheart to get back your jewelry
You aint from my hood, don't even rep Q.B.
Nature moved to Marcy
Man dick riding Nature, nothing else to say
Man Nature moved to Marcy
Back with ass niggas in fear
f*ck them niggas go head with the progam man proceed
Old lady pocketbook snatcher, car thief
Of course we aint friends, you never stood on no blocks
Streets or corners with zombies, ghouls and gangstas
Cops, drug dealers with pools of blood anger Just fills me when niggas let out of town to set shot
And get filthy rich, its just not
No more morals, no loyalty, no more community
Queensbridge, we gotta have unity

[Nas]
I put the name on the map after Marly and Shan
Q.B. before the ROC had one jam
Before the Death Row and Bad Boy beef
Had streets locked with raw talent, I laugh at the weak
So this about cleaning up house, my own backyard
Famous home of rap stars well known be getting robbed
P how many times aint you shamed that
Jungle was busting his gun to get your weak chain back
They dont respect you a checks due for me for your fame
Mega I hope you blow so I'm saying your name (Mega, Mega)
Hoes play your position cause you'll never be king
Even Jigga want the crown, ?? poor thing
I'm representing Queensbridge U.S.A.
Where two sk's go off every day new flesh lay
All you little roaches and rats
Besides my man Ricky, Nas the true ruler is back
So haters say

[Talking]
The bridge is over my dick, Bridge'll never be over
Long as I'm alive and breathing, Braveheart to the graveyard
I'm the William Wallace of this shit
Ayo P, Prodigy I got love for you man, I love you man
You know what I'm saying, just get them unloyal niggas
From out your circle, you can't save everybody
Niggas invited you to the hood, rep it right my nigga
Be untouchable my nigga, so it be Mobb for life for real
And thats real, ayo Nature I can't hold your hand through this shit man
I'm not your father man, be your own man, stand on your own two
I believe in you, believe in yourself nigga or dont even rep this
Ayo Mega you wanna be a gangsta? Theres real gangsta
Shit going on in the streets man, yo niggas is in the grind
Where you be at man? Niggas be bucking
Why you never bucking, where you be at man?
All of a sudden you the motherf*ckin Neo Brown of the f*cking hood
Its disgusting man, stay out the magazines
Keep my name out your motherf*cking mouth
Theres no more room for jealousy, we destroying and rebuilding
That means the cowards get out and the real niggas stay
Niggas been hating me since I been nine, shining
with suede motherf*cking balles on in silks
I'ma always be the young don, dont be like the niggas on the other side
Hating me cause I'm beautiful, real niggas in Queensbridge
You niggas come up and get this money and move on baby
Q.B. 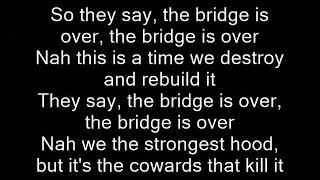