Synthetic flesh, sinful virtual life
Reflected picture of perished strife
Deranged, your mind, as you can't swallow pain
For pain there are a thousand ways to...
They point their finger once again
Infected lies, it's the game

Altars of mindless, of innocent crime
Bleeding, and freezing inside

Cut to pieces, the deathrow is near
Hypnotic minds hear the screams of fear
Sheep in the line, take a knife cut their heads
Assuring us, paranoia the game
Value of words, you can place them on ice
Or click them all then delete all the files
Endless struggle of spirit and flesh
The last one – summon my "demon-guest"
A living dead with no "will to power"
Painted fear, count the hours

Synthetic flesh, set on fire, emblazed Gas them all, until none of it's left
Another murder, another black hole
A "living horror" in the land of the gore
Hallowed point in Jerusalem's streets
Set them emblazed, then be destroyed by guilt

Altars, of mindless, of innocent crime
Bleeding and freezing inside

Give your hand, join the river of blood
A shooting game as the story's been told
Faces on news, wanted dead or alive
You stare at the screen but for me it's alive
I scratch my skin till the blood red appear
Be my guest in the sentence of fear

Murder, a child killed, Islamic terror
In the land of the genocide
Cut down to pieces, or throw out your skin
The masses will rip your mind 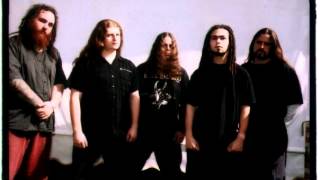