[Intro]
B-B-Bankroll (Big Latto)
Queen of the south
Know what I'm sayin', like (Yeah)
When I be doin' these interviews, they always ask me what's my hobbies outside of rap
Shittin' on bitches (Haha)

[Verse]
I'm the youngest and richest, these bitches know what's up with me (Rich)
If we beefin', I got you, won't book no shows in my city (Grrah)
Too picky wit' the kitty, he ain't hit me, bitch, I'm stingy (Hell nah)
Dare one these rap hoes to diss me (Who?), I been a problem since fifteen (Woo), yeah
Bitch (Bitch), act like you know this shit (Know this shit)
I dropped a hunnid on jewelry during a pandemic
Boss bitch, ain't met a nigga that can handle this (Handlе this)
I was up a quarter mill before the deal, no counterfeit (Yeah)
AP on me iced out, I can't tell what time it is
Shooters in the build', don't be the first dumbass to try this shit
I can't let no nigga baby mama me, they all green (Hell nah)
I ain't stand no threat from no p*ssy ho, she just talking (Hahaha) That bitch said I wouldn't be shit and now look at her watchin' (She watchin')
Rich at 21, y'all bitches owe me an apology (On God)
I just put some more money on my brother books (Books)
Another magazine cover, that's another look (Yeah)
I'm the queen of the south, got these bitches shook (South)
All it take is one wrong move to get your shit took
Y'all bitches out here movin' like a nigga puppy (What?)
Make him buy the Birkin for me 'fore he even touch it (Uh)
If I let him hit the Latto then a nigga lucky
Slim thick, but the bank account gettin' chubby, talk to me
Uh (Uh), I be laughin' to the bank, y'all funny
Brand new day, brand new money (New money)
A broke nigga can't do nothin' for me (Nah)
Latto every rich nigga most wanted (On God)
Baby Glock in the bra, it ain't nothin (On God)
Finger f*ckin' these hunnids I'm thumbin' (I'm thumbin')
Big Latto, yeah, I keep the money comin'
Explain lyrics
Correct lyrics 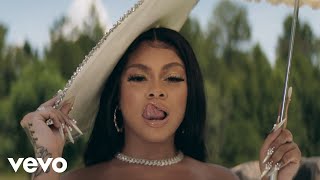