...
ghoulia was working in the mad science room
the chemicals she combined created a BOOM
and before she even relised
her science mistake,
She couldn't stop dancing The Zombie Shake!
It's hard to describe this new
this new dance she created,
It's strange
and it's weird.
But it's not complicated.
She jumped and she lurched,
as she danced 'cross the floor
she couldn't stop, so she danced right through the door!
She danced through the hallway and caused quite a scene
it was the craziest dance the students had seen
and when she bumped into slow moe in a twistmost outrageous
they discovered the Zombie shake was contagious!
Venus and Rhochelle were the next to be taken
shifted and shaken but it didn't end there, no were just getting started
no there's no stopping the dance of the dearly departed!!!
as they danced through the lunchroom
they continued to spreadthe dance that resembled the walking undead
you should try it yourself, it's really quite fun
everyone was dancing by the time lunch was done!
it didn't take long as you might of expected
before the entire school was infected
athey said 'as long as we're consumed by this montrous trance, we might as well through a Zombie Dance
Ghoulia had a blast at the Zombie theme formal
but now it was time to put things back to normal
she did her best to correct this whole dancing kafafal
but instead she created the Vampire Shuffle 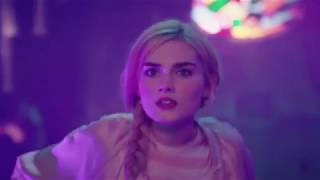 check amazon for The Zombie Shake mp3 download
these lyrics are submitted by mxm4
browse other artists under M:M2M3M4M5M6M7M8M9M10M11
Record Label(s): 2015 Mattel, Inc
Official lyrics by