[Intro]
(Southside on the track, yeah)

[Verse 1: Lil Baby & Moneybagg Yo]
Tried to dumb me down but I'm too rich to act like I was broke
Gucci store, seventy-five hundred on a leather coat
Free the bro, yeah, I probably say that shit in every song
That corner store held me down, I didn't have nowhere else to go
We kickin' doors, Brendan had no clothes, his mom was on the dope
We switching up, got our hands on a pistol, we started stickin' up
Just give it up, he got a bad temper, he be quick to bust
My life was rough, we wasn't going to school, we tryna run it up
Walk to the bluff, free lil' Jaq and D, can't say that shit enough
Stolen truck, we got on the chase but we had got away
Antonio make it, Lupo caught the case, that shit there was cray
Marco survived, he got in another Wraith, somebody died
I been in the streets since I was nine, for real
Think this money got me traumatized, I ain't got no time to chill
I know if a bitch won't, then my mama will
I can't lie, I popped a lot of pills to get me in my mode, but I can't take no more
All this pain, I don't know how to feel
I was taught if you gon' take it, go on and take it, I don't know how to steal
f*ck the opps, we gotta kil l
Slide back on the same drill
Let the stick head out the window, I'ma drive the wheel (Go)

[Verse 2: Moneybagg Yo]
All-white my teeth, I had to travel overseas (G's)
Lil' bitch want a blessing, told her f*ck me 'til she sneeze (Achoo)
Baguettes in my Cartiers, they keep asking, "What are these?" (What's that?)
CoCo from the floor up, all I rock is double-C's (Chane'-ne')
No slowing down, shot with BGE, we havin' all the pounds
Ja Morant, 12, bows in the air, called him and dunked it down
He hiding out, I just got the drop, he on my side of town
I'm fresh to death, had on Balenci' runners, but I walked 'em down (Brr)
Lil' bitch bad, she call me dad like I'm her father figure (Woo)
Triple beam under the bed 'cause I can't wait to hit 'em (Can't wait)
You know the rules, can't bust a move if I ain't got my pistol (Can't do that) Counted up a half a mil' then get a finger blister (Blue cheese bag, ayy)
This shit ugly, shit get mad real (Mad real)
Two hitters behind me, they my adlibs (Go, go)
Put on every chain, still ain't got time to chill (Woo)
Choose one you want, attention or a hundred mil' (Which one?)
Niggas don't be on shit no more, so I don't do favors
Dior, Louis V, Amiri, I got on a few flavors (Drip)
Gang gang air this bitch out like a food saver
He wanna be famous, f*ck it, put him 'cross the newspaper (Bow)

[Verse 3: Rylo Rodrguez]
Cuban link around my neck even though I'm a nigga, yeah
Tennis chains, I'd probably shoot my shot at Serena Williams (Yeah, yeah)
I did some shit beyond said (Beyoncé) way 'fore I heard about Jigga ('Bout Jigga)
Where I'm from, you got a felony warrant, you still gotta keep a pistol
Break it down and trap it (Trap it), wrap it up in the plastic (Trappin')
Lil' ho, she too savage, f*ckin' her friend baby daddy
I had to crash in the trap house, cuz that bed had too much traffic
I know George shoot this bitch like Stackhouse like he play for the Mavericks (Rollin')
Geekin' in the club, move around the crowd, get it
She said she'd let me f*ck, I was just finna ask if my dawg hit it
I witnessed some dope boys six feet that got rich off midget
I had f*cked a cougar, she ain't even know these thousand-dollar britches
I can't be playin' with these niggas, can't be playin' with these hoes
All the youngins know is doors locked even though keys open doors
Know it's open safe, even my woman getting cake
No money in my pocket, I left it at the bank
5k on a lil outfit, I wore it two days
Sixteen hundred on some Hi-Tech, drank it in two days
Had to report so he prolly gettin' rich
If I die 'fore all my opps, make sure they get spinned 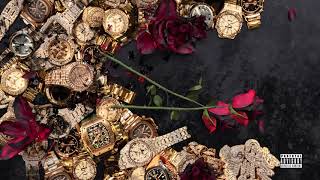