Well, I hate banks, I just can't stand 'em
Gimme a shovel and, man, I'll plant 'em
Six feet under, that's where they belong
"I Hate Banks" is the name of this song
I think I'll rob myself one or two
I hate banks, yeah, how 'bout you?

Well, lend me a nickel and lend me a dime
Repossess my house any old time
Financial institutions
Think they're so high falutin'
Just a bunch of fruits in three-piece suits, yeah
Tryin' to steal all my loot

Yeah, throw the money changers outta the temple
I hate banks, it's just that simple
A Royal Crown pomade tin
Is the best thing to keep your money in, yeah
Mason jar is okay too
If you see a bank, well, you know what to do

Now, lemme tell you people something
The only banks I like, well, I like Ernie Banks alright
And I like the banks of the Mississippi River
Yeah, and I like banks of Fender twin-reverb electric guitar amplifiers behind me
Ragin' on the stagin'

Well, when I walk in, they treat me like a dog
Wanna hit 'em in the head with a doo-doo log
Republicans, one and all
Their tallywhackers are mighty small
Stealin' from the poor and give to the rich Wanna make the bank president twitch in a ditch

Yeah, see that teller with the blue hair
Giving me the evil-eye stare
Won't cash my check, don't like my ID
Got the security guard after me
If I was P. F. Sloan
I'd say the Dow Jones can suck my bone, yeah, alright

Everybody say these three magic words
I want you to help me say the words, I want you to repeat after me, here we go

I hate banks, just can't stand 'em
Gimme a shovel and man, I'll plant 'em
Six feet under, that's where they belong
"I Hate Banks" is the name of this song
I think I'll rob myself one or two
I hate banks, yeah, how 'bout you?

Now lemme tell you something else
I'm not real fond of the phone company either, you know?
Yeah, and I don't like the cable TV company
You know why I don't like the cable TV company?
'Cause they just be sucking that stuff right out the sky!
They don't have to pay nothin' for it
I just get me one of them bootleg cable boxes
And get me one of them there, climb the pole and stick the thing in
I ain't gonna pay for it, no!
Explain lyrics
Correct lyrics 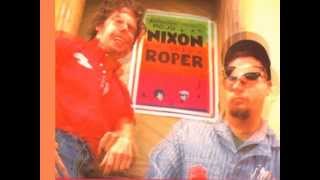