Drink Away The Pain Lyrics

Drink Away The Pain Lyrics


Yeah, about to get my thug on
The 41st side of things

But Gold couldn't take the dick and made me lazy
We split apart and now I met this new trick Dany
Now me and Dany, we been together ever since
Our love combines to form a science, what is this

I bust a cherry, took her virginity in ninety-one
Now that she's open everybody want to tap somethin'
Go get your own don't make me have to f*ckin' clap somethin'
I love my shorty more than life now ain't that somethin'

But I don't pay attention, she's my baby, the Dany
You know she drive me crazy she's my number one lady
Met her back in eighty-nine now she's twenty-two
Actin' like she forty, she said all I need is a man to support me

Besides, you from the 41st side of things
and Queensbridge niggaz be actin' like they kings
Pushin' Lexus' wearin' fat diamond rings
My cellular phone reigns supreme, international think rational
The 12th street crew move back when we come through

Tommy Hil was my nigga and other's couldn't figure
How me and Hilfiger used to move through with vigor
Had to sit and plan on how to make these seven figures
Said the Brinks is comin' through, at Fashion Avenue

At Tuesday at two, now we gotta form a crew
Now we gotta forum a crew, of motherf*ckers
Who ain't goin' out like suckers
Told me call Karl Kani and all my other brothers
I told my sister Walker, who was the smoothest talker
Negotiate the deal with them other money stalkers

Diesel drove the the beemer, the hatchback of course
Nautica'll navigate to keep us on course
Polo's acting bolo trying to say he the Boss
I said shut the f*ck up, the kid is out where the loot's at
Got a big trey pound, picture just to swoop back Timb is on the roof with the twelve gauge rifle
Scope is on the top so you know he livin' Eiffel
Took the aim of Oswald, caught him North in the face
All them other kids they had they tools aimed at space
Levi had the snub so you know they gettin' laced

Donna Karan was cryin', 'cause mad shells was flyin'
Damn all we want is a piece of the pie and
Nike scooped the sess 'cause he moves like air
Threw them shits up in the trunk now we up out here

Got back to the mansion, to divvy up the paper
Helle Hansen was the brain of the whole entire caper
So she felt it was right, for her to get the whole slice
Everybody in the crew didn't think it was nice
I guess not and guess what's hot, so guess what
Guess took the jigga and jigged her in the gut

Then I thought to myself yo this drink is right
Gathered up all my dough, so I spent the night
I can't help it, she got my brain in a headlock
Niggaz started riffin' why you trickin' yo diz shit must stop

Moms like you need to see the AA
Better hope they help your ass out on the same day
But enough of that, I got the shake so I need dat
Son caught me stressed out I just be that
But when it comes to Hemp Rock dunn I need that
She's my shorty for life so f*ck the weed bag

For the brothers who ain't here
Pour a little on the floor son
Time to get a little bent do our thing
Word up, the 41st side of Queens
We gettin' bent, know what I mean?
It's an everyday thing 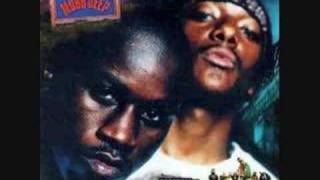