Kiske:
-----
Well, Japan. We've been there, I think, two times now, and it's always been a great fun playing there. I like the venues. They are sounding very good, they look very good, and kids over there really appreciate good music and stuff. And I think the next time we're gonna play at the Budokan, which is pretty cool. Lookin' forward to it. It's gonna be fun.

Kiske:
-----
"Kids of the Century" is the first life sign of us after two and a half
years. And after all those rumours going around about this band - me
leaving the band, me splitting up, or the band splitting up, and all that
stuff, which has been quite a lot. Maybe that's normal when the band's not on the scene for a while. But after that it feels really good to have,
actually, a new album ready and a single out. So the kids know we are still there. And with the music you can prove what you can do still even without one guy that just left the band. I think we found the right person there, Roland. And I think the album says everything. Yeah, I wrote "Kids of the Century" about more than two years ago now. And remembering that time I feel like, when I wrote that song, I was in that feel of that all the kids today, they just feel like they haven't got anything to do with the problems. Everything goes wrong, the nature or whatever. Just came out of that feeling actually. And that's what the song's all about, I think. What the kids today...Because I feel like everybody's responsible, especially the kids. If they don't feel like they have to change anything or have to make things better, nobody will.

Weikath:
-------
Well, the nice thing about Roland being in the band is that I saw him
like, I don't know, fifteen years ago or so on stage, and I thought that
was pretty impressing, what he did there, and I could never forget about that. And that's why actually I called him up then when we needed another guitarist, "Remember that guy?". And so it took me, like, four hours to find out the number, like I had to phone up musicians I knew and suddenly
somehow I got the number, and phoned him up: "You might not know me, but I know you. How about playing guitar in Helloween?" And he didn't even know the band. So I had to give him some examples of our songs, like really loud, cranked it up. And so, well, he was interested, like it quite a lot. And then we went to rehearsing, we had to do the whole stuff within two months. 'Cause then we had to go on an American tour and Japan meant two hours of playing. And well, ha ha, quite a tough job I would say. After all, I mean, we can handle that, we are pretty good, you know. And I'm sorry about that, but well... yeah, Roland is a very nice guy. He's doing a big part of the band with his character, and his kind of being. And it's quite a difference too how the whole thing worked before, because he is a completely different character. He is a lot more calm and very critical. He's always got his own opinion and that's exactly what we need.

Kiske:
-----
Yeah, we recorded the album at PUK studio in Denmark, which is a very good studio, I think, very lovely place. It's right in the middle of nowhere but that's actually what we wanted, to really concentrate on the album. And working with Chris was pretty cool, because he's got a very strong sense of humor as we like it. And we had some cool moments there and that's all caught on the album. Yeah, the production that Chris Tsangarides has done is right in your face. That's the best description of the sound actually. So just check it out! Schwichtenberg:
--------------
Crystal clear, or...

Weikath:
-------
I would say thank you to everybody who kept up the faith during all that time, and after all, those rumours are untrue.

Schwichtenberg:
--------------
The best thing for the fans, for the people who like us, is just to listen
what comes from us directly, like this now, and the album of course.

Kiske:
-----
The thing is, forget about what's been in the magazines, or what has been said, or all the stuff. And just check out the album and you know what's going on. Of course, the single as well.

J: Hello I'm Johnny and I thought we were going to do the
interview at your place.

W: Well, hello there. Well, actually this is my place. Now just
come in and let's sit down over there.

J: Yeah, but weren't we going to do photographs as well?

J: Well, it's just that it's a bit bloody smoky in here. I can't see
a thing.

W: Oh, alright we can open a window. We might get rid of the
smell as well I guess.

J: Ah, hey your English is coming along pretty good. It's not
bad.

W: Oh, oh thank you, thanks. But I know, much people
say that.

J: Ah, um, is this me? Can we get started now or are we just
gonna f*ckin' keep talking like this.

J: Well I suppose so, but don't you think we should get...

W: You know I thought it could become a real smashing hit. I
think it's great! Hey come over here and I'll play it to you.

J: No, listen, listen a minute, listen would you like to get...

W: Oh, I sung it, I sung it myself 'cause it's more original. Great
huh?

J: Yes Michael but don't you think we have to...

W: Wait here come the chorus, coming right up. The refreng as
we say in German will be a milestone in German rock history.
Here's the chorus. There, there it goes.

J: Michael, Michael don't you think we should um...

W: Oh, wait, wait, wait. I'll wind it a bit ahead you know,
and I'll play you the solo part and because it's the best solo I
ever played, you know.

J: Jesus, God damn it! I really don't think that we have the time
to do this.

W: Um, OK, OK. You will hear it anyway, a thousand times
when it's a, when it's a hit! You'll, you'll hear it on every radio
station and on video! Well how do you like it, it's a great track
isn't it and I like the lyrics 'cause I wrote them and they're quite
rock 'n' roll huh?

J: Well actually Michael, I'm really sorry but I don't really like
it. It's not really...

W: Maybe you didn't listen properly. I could maybe
change the lyrics here or there, but it's really Kiss!

W: Listen, I play it to you once more and then you'll admit
that it's really. No?

J: No, not at all. Just look. I don't care how many times you
play this crap to me, it still sucks!

J: And anyway, I mean, oh Jesus, I'm gonna go away and
interview Roland. I mean, Jesus, what a bunch of f*ckin'
bullocks!

J: What a f*ckin' bunch of bullocks!

W: Um, well, so, what's wrong with him? Maybe next time I
should do it with someone from Kerrang.
Explain lyrics
Correct lyrics 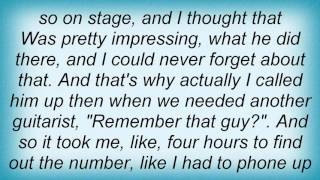