A knee on the floor, then the final breath:
there comes the victory,
the final step before what's next.
Darkness speaks and orders,
and through the hazy veils of this life so far away,
cries the child who doesn't want to play.

They'll never get him alive.
That's why he's reborn to die.
With all the sorrow he found
he buries the last relics of hope
for he knows,
for he's been told,
for he's been proven.

The fate brings back
forgotten shadows before his tired eyes
to better throw him down,
but fanatic rage fears no challenge.

And he cries of joy and pain at once
at the sight of the crushing fate,
the inexorable outcome.
They die his death.

The father is done with lies.
The child couldn't believe anymore,
so he saw the truth therein
and built the ruins of his existence upon it.

He goes as death in life,
as the shit-covered sword through healthy flesh,
walking in the voice of the father,
in his work of entropy,
in his teaching of life denial. 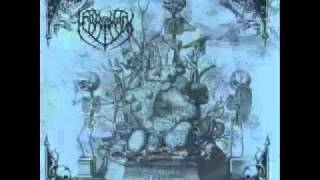 check amazon for Adiabatic Bonds Of Consanguinity mp3 download
these lyrics are submitted by kaan
browse other artists under M:M2M3M4M5M6M7M8M9M10