[Intro]
What Juicy say? He be like, "Shut the f*ck up"
Ah
LilJuMadeDisBeat

[Verse 1]
Please bitch, do not try to cap on me
Like I ain't the hottest out naturally
I go anywhere in my T-shirt and chain, ho, killin' shit casually
Like I ain't the hardest in Houston
Like bitches ain't hangin' to use me
Like niggas ain't beggin' to do me
From ballers to rappers, they bitches included, huh
Like I ain't the life of the party, hmm
Shit can't get started without me, huh
Like I ain't take over a season, the summer is Megan's, bitches ain't eatin', hmm
I bring the hood out a classy bitch
Out in Calabasas doing ratchet shit, hmm
Thumbin' through commas, ain't worried 'bout comments, ho, I'm really havin' shit
Invite me, I'm bringin' the ghetto, I be with the ghetto, it's in me, I can't seem to let go
I'm goin' hard in this bitch, goin' hard for them kids, doin' shit they ain't seen in the ghetto
I'm goin' hard for my mama, she knew I could do it, I pray every day just to prove it
I'm goin' hard for my granny, she want it, she have it, the hood goin' hard for Ms Paxton, huh
Megan can't do this and that, ha
They hate to see where I'm at, hmm
They wanna put me in beef, shit, them bitches ain't talkin' to me, huh
Southside shit forever, ho (Ayy)
Get a Brisk tea from the Texaco (Huh)
Rockin' booty shorts to the corner store (Baow)
Niggas still trappin' out a Baygo, huh
[Interlude]
Like, I can't even take half of you bitches seriously, like
Half of y'all don't know if you f*ck with me or if you wanna f*ck me, haha f*ckin' bitches, ah

[Verse 2]
Man, I done took off, bitch, I'm outta here
I'm on a ship, outer space, I'm a rocketeer
You ain't in my league, bitch, please, you do not compare
In the rap game but I'm really playin' Solitaire
Even if we ever had the same dick before
Don't get confused, we are not the same ho
I don't give a f*ck what he did prior to me
Only thing that matter what he did when he knew me, ayy
Look at all this blue cheese (Ah)
Spent that on my jewlery (Hey, yeah)
He know I'm the whole coupe (Hmm, hmm)
She is just a two piece (Ha, ha)
First we were just f*cking
Now that nigga love me (Ah, ah)
You need him for support
Together, we make money
Take the p*ssy out his mouth then put it back in
'Fore I walk through, niggas know I need the backend
Real hot girl, use the p*ssy like a weapon
Make him think he finna f*ck then never let him
Iced out, got the whole freezer on my neck
Hoes actin' petty but I got the new Patek
I ain't say it first but I'm better than the rest
Hoes throwin' shots but I stay with the best
Hoes throwin' shots but I'm ducking like The Matrix
I ain't seen a bitch pop shit like me yet
Anything I ever seen you do is on the 'net
Every bar I spit hard so the beat erect
Hoes love to play with me until I let it eject
Stompin' hoes out in some shoes they ain't seen yet
Hoes love to sneak diss, yeah, bitch, I seen it
You ain't say it to me when you see me, you don't mean it, ah
[Outro]
Real f*ckin' hot girl shit
You know, Young Tina Snow still goin' hard on a ho, ah
Explain lyrics
Correct lyrics 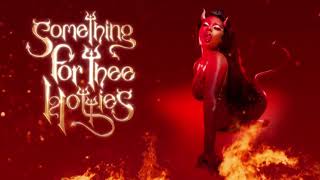