A classical operetta of three acts.
The liberetto was written by Mr. Scantisek Storm.
Music by Master's Hammer,
a promenade although also a chamber orchestra.

The event took place under the slopes of the Krkonose mountains in the
summer and autumn of the year 1913, Anno Satanas.

Calamaria = a daughter of Spiritus the landlord, a well known medium.

Poebeldorf = the Captain's aide-de-camp, and a vile thief

Blether = a groom of castle's stabled and a denouncer.

Spiritus = a landlord of the Jilemnice inn.

A brief overview of the liberetto:

We have emerged now in Jilemnice in the year 1913, and, therefore in
the period when the popularity of spiritism (brought Bohemia by Etrich
as early as 1880) is at its peak. At first it had been performed
mostly by Kckonse weavers at Trutnov, but soon it spread all ober the
county, and so from the very beginnung of the new century, there had
been plentiful spiritistic seances at Semily, Nova Paka, Jelezny Brod
and Fielemnice, attended by both young and old people - a physician
sits there along with the undertaker, a clerk by the side of a
blacksmith, a thief together with a gendarme. The farming, and
cosequently, all of the economy is quite naturally being neglected,
and the population demoralized.
That is why the new Jilemnice Captain has been appointed. He is
supposed to rid authorities of bothersome spiritists, who have even
refused to pay taxes. On the day Captain is due to take over his
duties, A Prague student named Atrament comes to Jilemnice. He is a
free-thinker of a doubtful character, but he is extraordinarilly
witty. Besides that he is thoroughly interested in spiritism...
Explain lyrics
Correct lyrics 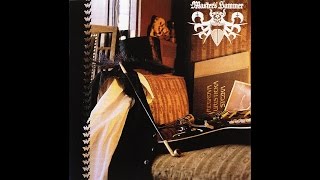 check amazon for The Jilemnice Occultist mp3 download
browse other artists under M:M2M3M4M5M6M7M8M9