How we doing for time? We good?

[Verse 1] Wake up in the morning and I drink my coffee But now my girl knows I don't talk talking Till I (Wake up!) She knows not to take it personal Until I've had a cigarette my mood is irreversible That's how it's always been but things have gotten worse Because now for me to start the day I've got to pop a Perc Started out for fun, it was purely recreation But now my mind is on a permanent vacation Lost my motivation, lost my inspiration My mission every day is escaping from reality Calling people back and paying bills a technicality It doesn't really matter cause I as long as I got twenty pills A couple new movies and my girl comes to my house to chill I even got her hooked for a while when she asked, "How's it feel?" But she's responsible, she passed that phase Now people look at her like why the f*ck he act that way? I gotta (Wake up!)

[Interlude] About three years ago we were doing a show and we drank like usual cause we drink for every show. And my homeboy asked like, "Hey, you wanna try a Percocet?" And I was like, "Okay, I'll try it." He was like, "Yeah you'll have more fun." So I remember doing that show and it was just like BOOM. It was like everything was so much brighter...

[Verse 2] You can ask anybody that does dope, the opiate is like utopia It's tough to cope with it, I quit for six weeks and do it for two months The problem with that: I was just gonna do it once One day turns to two into a week Until I'm locked inside my house and I've turned into a freak Jump around my living room at five in the morning With the music so loud you'd think that I was performing And if that ain't a warning that I've gone too far After shopping I can never seem to find my car And it's a shocking, that's a fact and you're walking forth and back And you're talking to your dogs and your dogs are talking back And they are not even with you, they are back up at your place Only to find you're in your bathroom scratching at your face And I'm trapped in outerspace, by then you'd figure it's quits I fall asleep sitting up with the cigarette lit, shit wake up
[Interlude] I started getting more like deep into it like I'd do it for the weekends and all of a sudden it'd be Monday I'd get high and then Tuesday I'd get high and then I'd wake up in the morning and say, "f*ck it, I'll just keep the blinds closed and get high from when we wake up yo till six, seven in the morning." And before you know it a month's gone by.

[Verse 3] I'm acting like a clown but think that I'm debonair I can't dance but when I'm stoned I'm better than Fred Astaire With a voice like Sinatra, I really can't sing Looking in front of the mirror posing like James Dean (Wake up) Come on, let's get realistic When I quit this shit I get real distant And I don't even look at my reflection Sing? shit I sound like a trombone section Stoned I feel young, detoxed I feel old Feels like my f*cking heart's gonna stop then explode So cold I start shaking, my body is aching Well that's what I get for partying in the matrix I got a problem let's face it While you listen to this song I'm probably wasted Acting crazy, people looking at me like I'm a pyscho Gotta give my a head a shake, it's time to break this cycle Need to (Wake up)

[Interlude] You know you think you got that shit under control but if I'm doing it every day how could I be having shit under control? You gotta be happy with life as it is; with your mind clear, you know? It's kind of crazy because even when I think about like myself in the future I think yeah I'll have like a little secret room in my house and I can go escape for the night and get stoned. It's kind of f*cked up I guess. It's like I'm incorporating getting high into my future. That's probably not the best look. 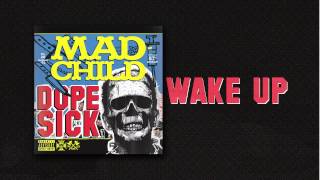