[Verse 1]
I think happiness went thataway
Sometimes you just have to wait
I never believed in God
But things got so f*cked up
That I had to pray
Used to steal my Daddy's Cabernet
Never thought that it would turn into a rattlesnake
Thinkin', everything will be all right
If we could get through the week
Maybe see another Saturday
Rollin' round, we know where to go
Argue with the homies over who's gonna roll
Bumpin' Goodie Mob, have some food for the soul
Till it's two in the morn'
When rain hits the windshield
And everything is still
Nothing really is a big deal
One hand on the steering wheel
And we gon' be all right

[Verse 2]
I had a brown paper bag
St. Ides in that motherf*cker
Around the city we smash
5-0 comin' then you know I'm running
Crawl into broken fences, when shit gets hard
You know who your friend is
And when I lose perspective
Need to go to a place where I lose reception
Looking at the satellites pass by
Reflecting on my past life I can barely remember last night
Another morning, swearing it's the last time
Where would I be?
We can't start over, you don't get a new ID
I know the devil fancy me
But that don't mean the motherf*cker get to dance with me

[Verse 3]
I bought a house, second guessing what I own now (What?)
Traffic moving kinda slow now (What?)
I watch the population grow wild (What?)
A bunch of people I don't know now (What?)
My city's changed and my zoned out
I thought about New York, maybe SoCal
Put up condos people can't afford now
Landmarks bulldozed, been tore down
Overpopulated but can seem like a ghost town
Keep a couple real ones with me when it goes down
Lack of diversity, I think about Sloane now
Only reason I would ever leave my hometown
If I still drink, I would crack a 40 ounce
Parents finally left, moved away, and they sold the house
It's really hard to ignore it now
Wish that we could sort it out
Last couple sips, pour it out
St. Ides 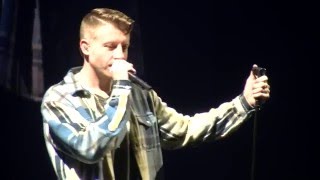