[Verse]
I annihiliate the alphabet, I'm acting like an alien
Abusive with abilities acrobatic agility
An argyle alligator with aluminum axles
Ate all of Amy Adams Adams apple like an apple
Buff biceps like a British body builder
I was at the bar buzzin' off brownies with Bob the Builder
I'm a big bad boss with a bigger belly than Buddha
Bought a billion dollar boat made of bacon, ok, boomer
Crap! Creators are cautious because of cancel culture
I creep with the cops, I'm a caucasian that can't be conquered
Dark like a demon diving deep as a dolphin does
Dangerous in a duel, I dissapear like I'm Dhalsim, duh
Doing demolition devastating DJ's
Dude, I dribble dynamite like D-Wade on d-day
Elvis eagerly electrocuted eighty eskimos
Ellen eats eggplant every episode
Farewell Felicia, Fernando has a fetish
For ferrets and French fans of FIFA with furry fingers
Grandpa guzzled a gallon of good gasoline
Godzilla galloped to the gala in a gown that's green
Hector is a homicidal himalayan hippie
He was huffing helium with Hillary and then it hit me
I'm a handsome hooligan, I have a hundred haters
Hurtin' me, I hit 'em in the head with a hammer, I'm half Hercules
I'm ill, I'm Ichabod
I illustrated the Illiad icy like the Iditarod
My intellect is iron, I'm illustrious, I'm infinite
Influencers on Instagram are icky imbred idiots
Jumping and jiving joking and jamming at the jubilee
As journalists are jeopardizing judgment for the JuJu Beads
A Jesuit from Jupiter jabbed Juggalo Jane
In the jugular vein, a Juggernaut juggling Jade Jabberwocky! Kim K kidnapped Kanye
Had kiddies, I'm karate kicking kindergarten kids
Right in the kidneys, I'm a Kazakhstani killer like Khabib up
In my kingdom, I'm the king of kilohertz, I'm kicking the kamikaze
Listen ladies, Lethal is a legendary lyrical lunatic with the lexicon
The Lucifer of language literally lit like Lebanon lucky and lucrative like a leprechaun
Mac makes marvelous melodies for the money
Making the major moves, I'm moody like Macedonian mummies
Nah, I'm nutty like Napoleon, I'm nuclear and noxious
There's an orange ostrich in The Oval Office, oops
Peter Piper picked a pack of Palpatine the powerful and perilous's perriwinkle poop
My quarantine quadruple time makes you quiver, I'm quirky with quotes, let's go quicker
Rapping like a renegade, I'm ripping up the rhythm with a razor, man, I'm rugged, rowdy, radical and ravenous
I'm sicker than a sausage as it's soaking in salmonella, I'm sharper than a scissor, and a sword is what I'm shaving with
I'm totally terrific and tubular to the tip top totalitarian terrorism on Tik Tok
Talented and talkative tyrannical and tumorous, I'm totally titillating and tender with my tutelage
You and I should unify and take a U.F.O. around the universe, the U.S.A. is so utopian
Vocab is vivid, my victories vicious, I vacillate venom evaporate votes again
Women on the West say: "We want waffles"; X'Rayed a xylaphone, me and Triple-XTentacion
Had an exhilirating X-Mas, I am so yummy, It's yucky like yes kid 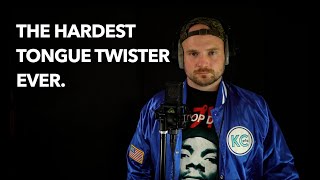