So let's go back to the Caddy won't slow down, go down
Hit the next street at the party gonna throw down
3 dollars to get inside
LBC flying high tonight
I need a pleasure release sort of like masturbation
Yeah, that LBC kick, my malignant fascination with sensation
It grows, on the mic where I flow
Hide all your fans cause the shit's about to blow
I'm gonna stomp, stomp, stomp all the critics
Cause my lyrics are ideas not finetics
Reggae-punk-hop will never get tired
Bring in Adam the Townkrier- Fire!
Right up in ya, as we continue
To move the groove that in the end is gonna win ya
Out, I doubt, no competition
When I'm on the microphone you listen
You're missing the point, kid spark the joint
It's the way that you live, when you're a lucky boy
This recipe yeah you know me
This 5-piece band called LBC
Rest of the world passes by saying the world does not revolve around you
But my world revolves around me; no it's not conceit
Just a realization that at first I put myself before you
So I can stand on my own two feet, right next to thee
Yeah, LB Confusion is on the mic
I'm givin props won't stop with the shit you like
So skip the trip, and spend the night
Cause I'm believing that the time is right
L to the B we don't quit
With the styles of the while in the scene of this outfit
The 5 of us with this reggae punk child
Break em on in Stubhystyle
It's that L dot B dot C dot scene
Lucky Boys Confusion no we're not from Long Beach
But from Chicago, we'll make your mind boggle
If you meet the fungi from Colorado Always kicking down with our boys from the Swizzle
Everybody said our styles would fade and fizzle
My hair's still skunking don't be perpetrating me
I've rocking the mic since 1993
Oh, when I'm frustrated I've got anger in my head
I think of the relative ease of the life I've led
So many struggled and died so I may breathe air that's free
I hope when they look upon me they deem me worthy
We're just children of this wasted generation
Trying to make the best of our situation
So we play our music all night long
Till everyone will know when they hear this song
And here we go
Yes it's that 5 tone Lucky Boy posse
Pass me the Red Stripe so I can get saucy
And watch all the girls jiggle-wiggle their hips
Point to us and they pucker their lips
This LBC let me tell you what's in store
We'll play all night if you scream encore
It's the way we jam
LBC (Labuck) hits the stage don't try to compete
Ryan sits down and lays down the beat
Adam steps up and he matches the groove
Joe kicks the lead and J starts to move
Bop chicks do their off beat phish dance
420 Geeks try to make room
Carlito's getting naked and we're dancing, we're dancing
This is one from the Townkrier, come to get you higher
Happy to engage in the smoke like a fire
Boom! Come on and make room
Cause I'm hookin up the audible shroom, are you a buyer
Shit, god damn, what's the plan, here's the plan
Get high, get by any way I can
I drop the flow you drop the flavor
Kick the bassline just ask the neighbor 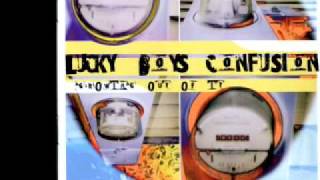