Oh, my Lord, I've seen the putrefaction
Hypocrisy in their f*cking agonic religion
Baphomet!
Destroy their bastard imploration
The storm will be followed by the blackened horde
And ever since!

Lies and hypocrisy has distorted my death!
Distorting your death...!
Distorted my Flesh...!

Baphomet!
Destroy their bastard imploration
Hypocrisy in their f*cking agonic religion For the exalted fight they have called us
Evil minds whisper the end...
Incisive death who receive the insane corpse
Become me, in a pagan, for the blackened horde...

In darkest rituals with the sword of hate
Prepare to die for the blackened horde...! 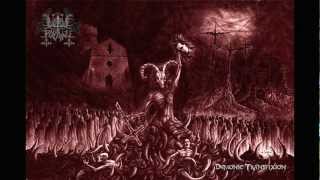