[Styles P:]
All I ever knew was kingpins and gangstas
Life start to change when you sitting around bankers
Investors, back when the Benz made the compressor
I compress my weed and never lost the texture
Went to get 50, they threw me 50 extra
Highly appreciate the real strong gesture
School of Hard Knocks, I never filled a semester
Fully loaded 9 with the big Winchester
Louch sold coke, Kiss sold coke
I sold coke, we all sold dope
Right around the time I couldn't look at my old folks
On my block shit, pop shit, getcha nose broke
f*ck around, let a shot fly
Ain't a minute of the day that I'm not high
Real nigga, I ain't switch up yet
We load heavy, hope Chevy make the pick up vet
Whether blood or a crip, yeah I stick up sets
So I used too, now I'm getting money off of juice too
I'm international, not rational
You do what I say or you do what I ask you too
Looking at the work like I get shit off
Looking at the hammer like I set shit off
Take head shots so you can take that vest shit off
LOX nigga, know we keep the best shit dog

[Jadakiss:]
Hip-Hop depreciates the value of luxury
Personally, I won't allow you to f*ck with me
15 a sack, bundles is 150
You just had to be there, the money would come quickly
Very obedient with the cake
Cause I'm the ingredients in the cake
One place you'd never see me is by the Jake
Big cigars, martini's by the lake
You still get a hundred by the face
My connect still speak no ingles
Says a lot about you if you hating me
Turn a little bit of dough into a bakery Bunch of copycats, a lot of fakery
Becoming a monster, that's cause you making me
I just wanna know who else is this strong
Generating this amount of money for this long
Shots pass your crew
Yellow gold kilo, Yacht Master II
Put your wallies dip so the top match the blue
Couple more shots I might blast ya boos
Can't judge so they rape this shit
I stand behind mine, got faith in it
I just sell it, I don't make this shit
I got work to do, I got cake to get

[Sheek Louch:]
Cake, Cake, Cake, Cake, Cake,
It's hard to see the Snakes, Snakes, Snakes,
They ain't thugs, they Jake, Jake, Jake, Jakes
Found their bodies in the bottom of these great lakes
Do I think he the king?
Never that bro, hol' up give that nigga a dap
Now these lame ass artists gotta think when they rap
Its almost back to the boom bap
It's no lyrical apps to download when I walk the ground fold
I'm heavy out the Chevy I dump for reload, DONNIE
Was something out a magazine
Pretty bitch whip something out a magazine
Gun on me, clip? Nah that's a magazine
I make money flip easy, no trampoline
I done made a millie, P and Kiss made a millie
Hood could of if he wasn't acting silly
But no hard feelings
I ain't even in the hood now, no more chilling
Chasing money, jumping off the tour bus posing for IG flicks
All around these chicks
I ain't OG, it's Rakim and Kane and them
I came right before Baby and Wayne and them
All these new niggas spit more pain than them
LOX, you'll never be the same as them 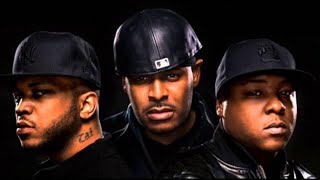 check amazon for Hood Cake mp3 download
these lyrics are submitted by BURKUL4
browse other artists under L:L2L3L4L5L6L7L8