All For The Love Lyrics

All For The Love
Lox
24 Hours To Live Scream L.o.x If You Want It You Can Get It Blood Pressure Not To Be Fucked With If You Know Bring It On Who Did You Expect New York Rap Think Of The Lox
All For The Love video Lox twitter

All For The Love Lyrics

[Verse 1]
When you think of me you think of a problem
Who? What? When? and how you gonna solve em
Automatic or revolving
The K I double S and, Here's the lesson
Most beams is infared, but mine's is flourescent
No matter where you go, I'ma spot you
No matter how many people you put me in front of, I'ma rock you
And if you try to be the hard top, I'ma drop you
I got to, treat you like the clutch, and pop you
Creep threw, in the 4-20 with your honey
Cuz you ain't nuthin' but a playboy that turned bunny
And the only the thing left to discuss is more money
In these ??? games these chickens, try to run me
Ya'll know ya'll can't touch us, I flow lushes
It's so real I make her hop out, and get the dutches
I'm sittin on a thousand birds, and I hide from the cameras (why?)
Cuz a picture's, worth a thousand words
Ain't ya'll heard? Ya'll get what ya'll deserved
Ya'll do the catering, while we just get served
And you got some nerve, for P-Hing
Jason, do you have any idea who you facing?
Just something about my shit, you'll never figure out
It's hot it's burning my mouth, that's why I spit it out
It must be, real hard for ya'll to listen
And it's sad, niggas is to broke to pay attention
[Chorus]

Chilling, sittin' on about half a million
And all my niggas, all my guns, all my women
Next two years I should see about a billion
All for the love of drug dealing

[Verse 2]
Hey yo, niggas know the line of work, Bullet proof designer shirt
Rolling with a China Doll, She'll be reminding ya'll
Don of the underworld, every block minded it of course
Jadakiss and L-O-X boss
A pro cause I grow off the shit that I absorb
You just another so and so, trying to flow, going broke
You trying to buy property, set it up for growing coke
Niggas making a movie, so I came to edit
Wiping everybody out, right before the credits
I'm a hard guy to get along with, get on a song with
When shit be going right, I flip into the wrong shit
The prime artist, expect me to rhyme hardest
Slash con artist, gonna get mine regardless
I ain't even big and I size niggas up
Cuz they eyes give em up, look at em and see they butt
I'm 22 with 10 ends so there that go
You hear that flow, and drove the underground wacko
Every since 12 I've been spittin like tabacco
Relax though, Pop the tape CD and the wax though
They wonder how, but the thing about ours
We open up 24 hours
Niggas don't sleep with eat so when they speak it mean power
So you should keep quiet, you a coward
About to be layed out flat, and pushing up flowers 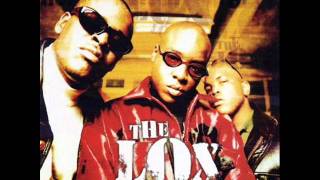