He said that I said what I never did said
But I said that it's rare that it's over your head
Ask me a question, then print a lie
I cancelled all appointments having vowed that he will die

Sky is gray and the grass unseen
And you're the dumbest **** this city's ever seen
He was laughing, shaking, high up in a tree But then he lost his balance and he fell down on his knees

So I leapt on that mother my anger to appease
When I grabbed him by the throat, he said "Oh spare me please"
Sure as gullible as my name I let him go back to the trees
And straight away the poisons flowing freely from the keys

The sky is grey and the grass unseen
And he's still the dumbest **** this concrete jungle's ever seen
That mother he was laughing, bathing in the heat
But then he slipped again and landed in the street 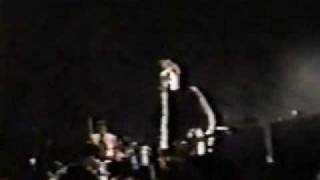