WE'LL RANT AND WE'LL ROAR
My name it is Robert, they call me Bob Pittman;
I sail in the Ino with Skipper Tim Brown.
l'm bound to have Dolly or Biddy or Molly
As soon as l'm able to plank the cash down.
chorus:
We'll rant and we'll roar like true Newfoundlanders,
We'Il rant and we'll roar on deck and below
Until we see bottom inside the two sunkers,
When straight through the Channel to Toslow we'll go.
l'm a son of a sea-cook, and a cook in a trader;
I can dance, I can sing, I can reef the main-boom;
I can handle a jigger, and cuts a big figure
Whenever I gets in a boat's standing room.
chorus:
If the voyage is good, then this fall I will do it;
I wants two pound ten for a ring and the priest,
A couple o' dollars for clean shirt and collars,
And a handful o' coppers to make up a feast.
chorus:
There's plump little Polly, her name is Goldsworthy,
There's John Coady's Kitty, and Mary Tibbo;
There's Clara from Bruley, and young Martha Foley,
But the nicest of all is my girl in Toslow.
chorus:
Farewell and adieu to ye fair ones of VaIen,
Farewell and adieu to ye girls in the Cove;
I'm bound to the westward, to the wall with the hole in,
I'II take her from Toslow the wild world to rove.
chorus:
Farewell and adieu to ye girls of St. Kyran's,
Of Paradise and Presque, Big and Little Bona,
l'm bound unto Toslow to marry sweet Biddy,
And if I don't do so, I'm afraid of her da.
chorus:
I've bought me a house from Katherine Davis,
A twenty-pound bed from Jimmy MeGrath;
I'll get me a settle, a pot and a kettle;
Then I'll be ready for Biddy - hurrah!
chorus:
O, I brought in the Ino this spring from the city,
Some rings and gold brooches for the girls in the Bay;
I bought me a case-pipe - they call it a meerschaum - It melted like butter upon a hot day.
chorus:
I went to a dance one night at Fox Harbour,
There were plenty of girls, so nice as you'd wish;
There was one pretty maiden a-chawin' of frankgum
Just like a young kitten a-gnawing fresh fish.
chorus:
Then here is a heaIth to the girls of Fox Harbour,
Of Oderin and Presque, Crabbes Hole and Bruley.
Now let ye be jolly, don't be melancholy,
I can't marry all, or in chokey I'd be.
Recorded by Alan Mills (Folkways), A. L. LLoyd (Leviathan)
Note: (from Penguin Book of Canadian Folk Songs, Fowkes)
This rollicking tale of a young fisherman's love affairs is a
Newfoundland offshoot of the widely known English capstan shanty
'Spanish Ladies', which described the headlands sighted in a homeward
voyage through the English Channel. Pacific whalermen later re-made it
to tcll of the Talcahuano Girls, with a chorus: 'We'll rant and we'll
roar like true Huasco whalermen,'and Australian drovers sang their
farewell to the Brisbane Ladies. The Newfoundland version has borrowed
veses 2, 8, 9 and 10 from the whalers' song; the remaining verses
about Bob Pittman and his courtship were composed around 1875 by W. H.
LeMessurier who was editor of the Evening Herald and later deputy
minister of customs in St John's. James Murphy printed it in Old Songs
of Newfoundland in 1912; it appeared in all the Doyle booklets; and
Mrs. Greenleaf heard it from Mr LeMessurier himself, and also from Tom
White of Sandy Cove, whose version had acquired some variations.
Paradise, Oderin, Presque, Brule and St Kyran's are tiny fishing
villages along the west coast of Placentia Bay.
filename[ RANTROAR
play.exe SPANLAD2
RG
===DOCUMENT BOUNDARY===
Explain lyrics
Correct lyrics 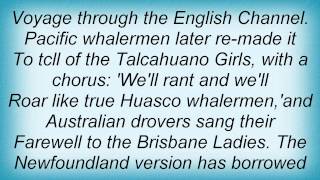